A team of fifteen trampoline, tumbling and double mini-trampoline gymnasts recently competed at the 2022 Loulé Cup in Portugal, returning to Scotland with four medals across the three disciplines.

Returning for the fifteenth edition, the competition took place from 28 to 30 October 2022 at the Loulé Municipal Sport Centre, with gymnasts representing Scotland for the second time since 2019.

It was an exciting start to the evening with the double mini-trampoline and tumbling gymnasts the first to take to the arena. Lucy Larg (Tay Trampoline Club) started her campaign for a place in the finals with great energy. Banchory’s Amber Cameron did well to also qualify for the final, with a fifth place finish and a score of 42.400.

Lucy ended her qualification in second place, with a score of 43.900. By the end of the finals on day three, she had delivered a phenomenal performance to build her score by 0.200 and picked up the gold medal.

Neve Kehoe from Dynamite scored 40.200 in the junior women’s tumbling competition, missing out on a place in the final, but delivering a solid performance on the day. The nerves got to Dylan Kilfedder (City of Edinburgh Trampoline Club) who took a fall during the junior men’s trampoline qualification, finishing in 18th place.

Both junior women made it through to the first DMT final, with Holly Allfrey (City of Edinburgh Trampoline Club) finishing with 42.900 and third place, and Scotia’s Hannah Brown picking up the first reserve space in the final due to an injury. In the final, Holly and Hannah finished in sixth and seventh place respectively, missing out on the chance to compete for medals.

On the morning of the second day of competition, gymnasts from Scotland generated a number of finals places, with both John Buist (Flyers Trampoline Club) and Ben Masterton (Two Foot Higher) making it into the top five in the 13-14 men’s trampoline category, with Aiden Ward from Sparta narrowly missing out on a top ten placing due to an error in his first routine and a total score of 65.690. During the final, Ben gained almost two full marks and claimed a podium place and the bronze medal, with teammate John finishing the competition in sixth.

In the junior men’s DMT qualification, Riley Summers from Scotia scored 48.700 and comfortably made it through to the first final in second place. He maintained his position on his next two passes, and took home silver with his final pass, scoring 24.000. Zac Macfadden (Dynamite) competed in the men’s 13-14 age group, and finished in sixth place. 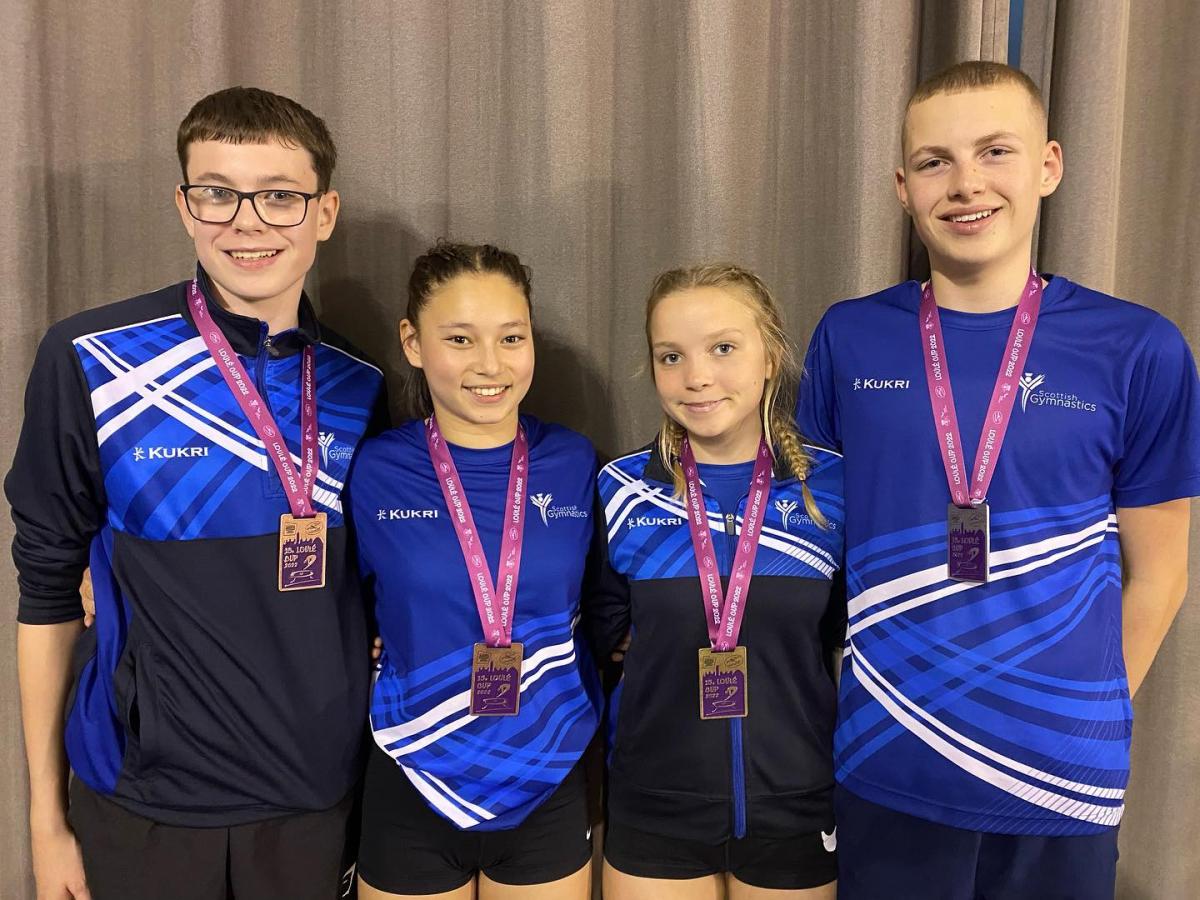 Scotland’s only senior gymnast at the competition, Nick Smith from Banchory Trampoline & DMT Club performed well against a tough group, narrowly missing out on a top ten finish in qualification due to the tie break score rules between three of the competitors.

In the tumbling competition, the younger age groups were well represented by Scottish gymnasts. Charlotte McGregor from Kingston Gymnastics Club finished her international debut in fifth place in the women’s under 13 age group.

There was a final medal for the team representing Scotland in the women’s 13-14 age group when Sapphire’s Heather Hughes took bronze after a fantastic performance throughout qualification and the tightly fought final. Her score of 21.500 being just 0.100 ahead of the competitors in fourth and fifth place. Scottish teammate Emily Brown from Dynamite also made it into the final, finishing in sixth place overall.

Congratulations to all of the gymnasts who competed for Scotland at the event, and we look forward to following their progress in our performance programmes over the coming year.

You can view the full results from the competition, and discover more about our performance programmes for Trampoline, DMT and Tumbling below.