Gymnasts representing Scotland at the 2022 Northern European Championships in Jyväskylä, Finland returned home with six medals, including a team silver.

The competition was return to the international stage for experienced gymnasts David Weir and Cameron Lynn following a period of recovery after the Birmingham 2022 Commonwealth Games. Both had previously competed at the Northern Europeans, winning team bronze in Iceland in 2019. Cameron also won all-around silver and two apparatus bronze medals at last year’s championships in Cardiff.

Alongside teammates from City of Glasgow, West Lothian and Portsmouth, the men’s artistic team secured a team silver on day one with home nation Finland taking winning the title.

There were strong individual performances with Cameron Lynn scoring 78.864 and Euan McLellan just 0.200 behind with a personal best all-around score to finish in the top five. Both gymnasts competed solidly across apparatus, with Euan becoming the only men’s gymnast in the championships to qualify for all six finals on the second day. He went on to win bronze on the rings thanks to his score of 12.833. 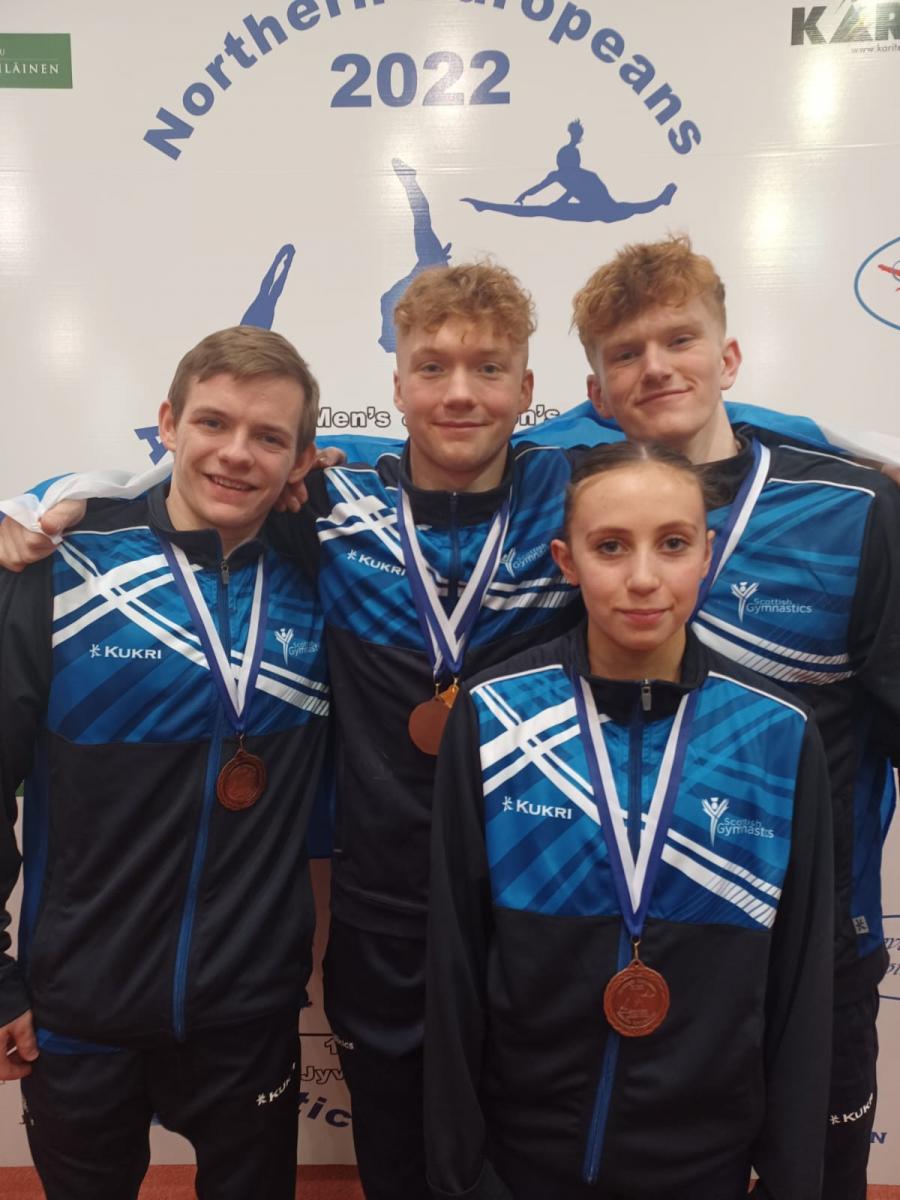 Cameron qualified for three apparatus finals, becoming the Northern European champion on pommel horse, improving on the bronze he won in 2021. He matched his qualification score in parallel bars to earn bronze and just missed out on a further medal on the rings by 0.100.

David scored 74.831 to finish in 11th in the all-around competition. He qualified for the floor final in fifth place, matching Cameron’s score – but with a higher execution score seeing him through to the next round. He held his nerve in the final and earned a place on the podium winning a bronze medal.

The championships also offered a first international experience for West Lothian’s Kyle Millar who did well to finish in 25th place. City of Glasgow’s Ethan Yates finished the day in 29th and Connor Sullivan (Portsmouth) came in 33rd. Connor’s fantastic 14.133 on vault meant that he qualified for his first international final in sixth place.

In the women’s competition, first year junior Ava MacFarlane from City of Glasgow competed very well opting to compete three out of four pieces on the day of competition. She finished the day in 33rd place, and successfully qualified for the beam final in seventh place, the only junior gymnast to make it through. On day two, she maintained her performance and claimed a final medal for the Scottish contingent, coming home with bronze.

Congratulations to Kirsty Fowler (City of Aberdeen) who scored 43.600 in her all-around competition, and Ellie Russell (West Lothian) who finished just behind with 43.450.

Sam Hendrikson, Scottish Gymnastics head of performance who was team manager at the event said: “We were thrilled to return to the Northern European Championships this year, with a mix of experience across the men’s and women’s team.”

Having a broad representation across the age groups and the support of our lead national coaches at the competition, the experience in Finland will help to give the gymnasts key skill areas to build upon and develop as part of our artistic performance programmes when they return home. It’s clear from the team’s success that the future for artistic gymnastics in Scotland is bright.