Louise Christie has made history by winning Scotland’s first ever silver medal in rhythmic gymnastics at the Commonwealth Games.

The Beacon Rhythmic Club gymnast put in the ribbons routine of her life to ensure her spot on the podium on the final day of gymnastics competition at Birmingham 2022.

Louise had already made quite an impression on the judges and the arena crowds in a brilliant start to her first Commonwealth Games. She qualified in 11th place in Thursday’s all-around qualification for the all-around final and for two apparatus finals.

Having finished in 10th place in the all-around final, this was her chance to compete for honours in clubs - her highest score in qualifying – and in ribbon. The last Scot to have won a rhythmic gymnastics medal was Joanne Walker who came home from Victoria, Australia in 1994 with bronze in the hoop final.

Each final sees the top eight gymnasts from qualification return and it was set to be a thrilling day of throws, twists and twirling ribbons as the gymnasts give it their all for a final medal opportunity.

The session began with the hoop and ball finals, where there were some stunning displays of rhythmic gymnastics skills, including Gemma Frizelle of Wales who won the hoop final with ease to secure a first gymnastics gold medal for Wales in these Games. NG Joe Ee then repeated that feat in the ball for Malaysia’s first gymnastics gold in Birmingham.

Louise from Aberdeen has been scoring consistently high for her clubs routine over the last two days of competition, with 27.650 being her top score in qualification, only dropping 0.05 in yesterday’s all-around. She would be the third to compete in the final and she’s ready to liven up the arena crowds. 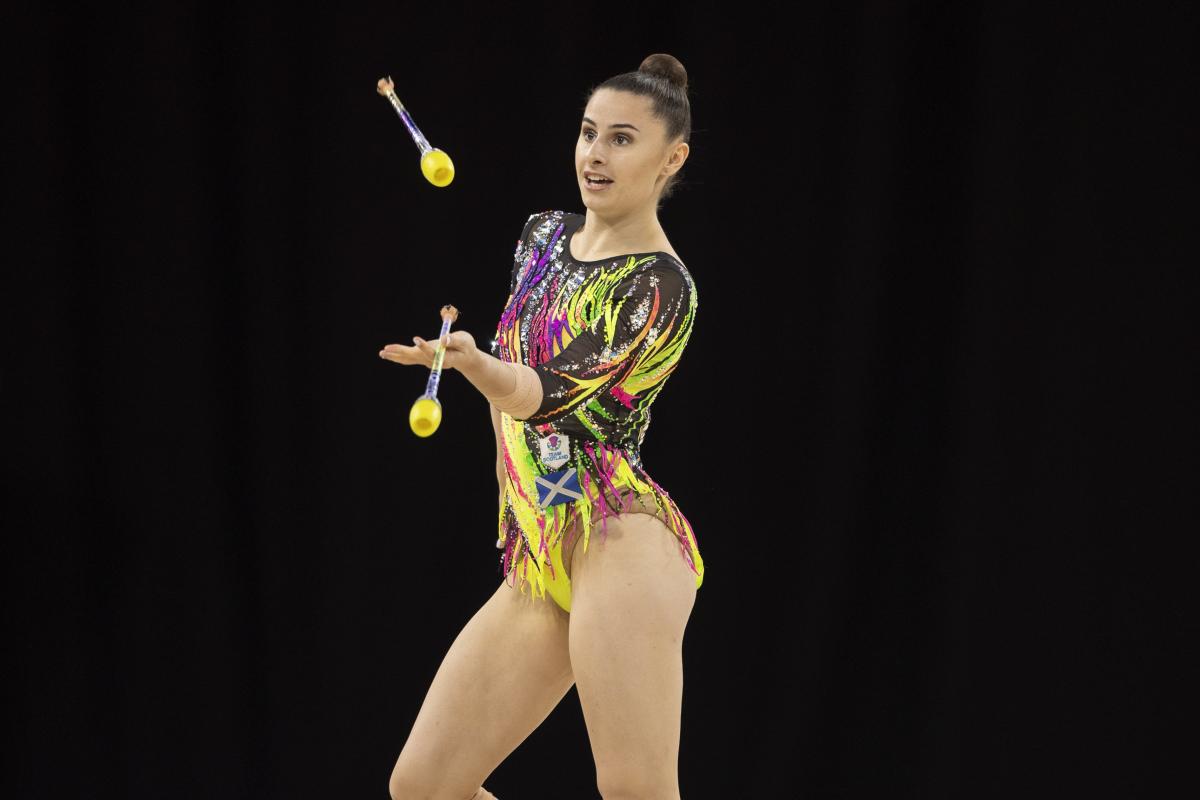 She starts her routine with some great handling of the clubs together and tosses with her foot. She’s in control and ready to stomp the floor with this high tempo routine. There’s plenty of complex unsighted throws and catches, including a couple of catches in back walkover and split position. She shows attitude and accuracy, and her fouetté spins are a highlight, smiling for the judges and the cameras. After a high throw from a front walkover, it’s a confident double forward roll to finish – trapping the clubs on the floor and punching the air, she’s delighted with how she performed in her first final of the day.

Her performance puts her in second place with five still to go, including the top qualifiers so a nervous wait as everything could change. After the final performances, it’s a huge 29.400 from Australia’s Alexandra Kiroi-Bogatyreva who comes away with the gold medal. Canada’s Carmel Kallemaa wins her second medal of the day and Malaysian gymnast Izzah Amzan comes third. Louise finishes in sixth place behind her GB teammate Elizabeth Popova from Wales. 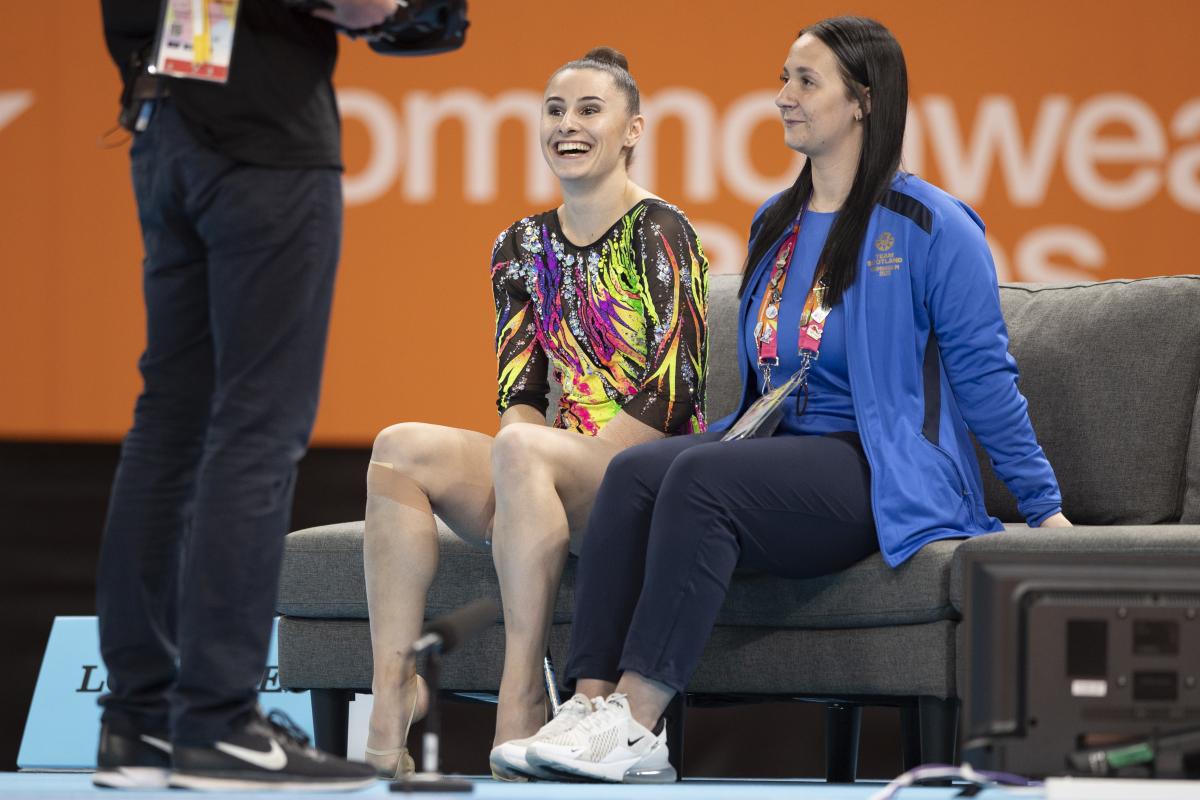 Louise is thrilled to have a further chance to perform the ribbon routine which means so much to her. With supporters waving flags in the crowd, she’s going to give the performance of her life. In qualification she scored 25.900 to secure a sixth-place qualification and in the all-around final, she had a few tangled moments which brought her down to 24.300. She is ready to correct the mistakes in her Scotland the Brave inspired routine packed with charisma and bring it home for her country.

Her final performance of these games, Louise gives it her all, with a couple of powerful tosses from her foot to begin the routine. Her split leg kicks are en pointe and beautifully controlled. Her choreography is the strongest we’ve seen it performed and she’s feeding off the crowd support. She holds the ribbon high with her linked leap section and creates stunningly tight coils as we prepare for the end of the routine. She delivers one final nod to the traditional dance moves of home and performs two butterfly leaps. She launches the ribbon high and it’s a perfectly executed trap with her legs to finish. Her ribbon control gives her a fantastic score of 27.550 earned through a significant improvement in difficulty value and higher marks for both execution and artistry. It puts her in first place with half the finalists still to compete. Her coach, Amy, is in tears as Louise leaves the floor. 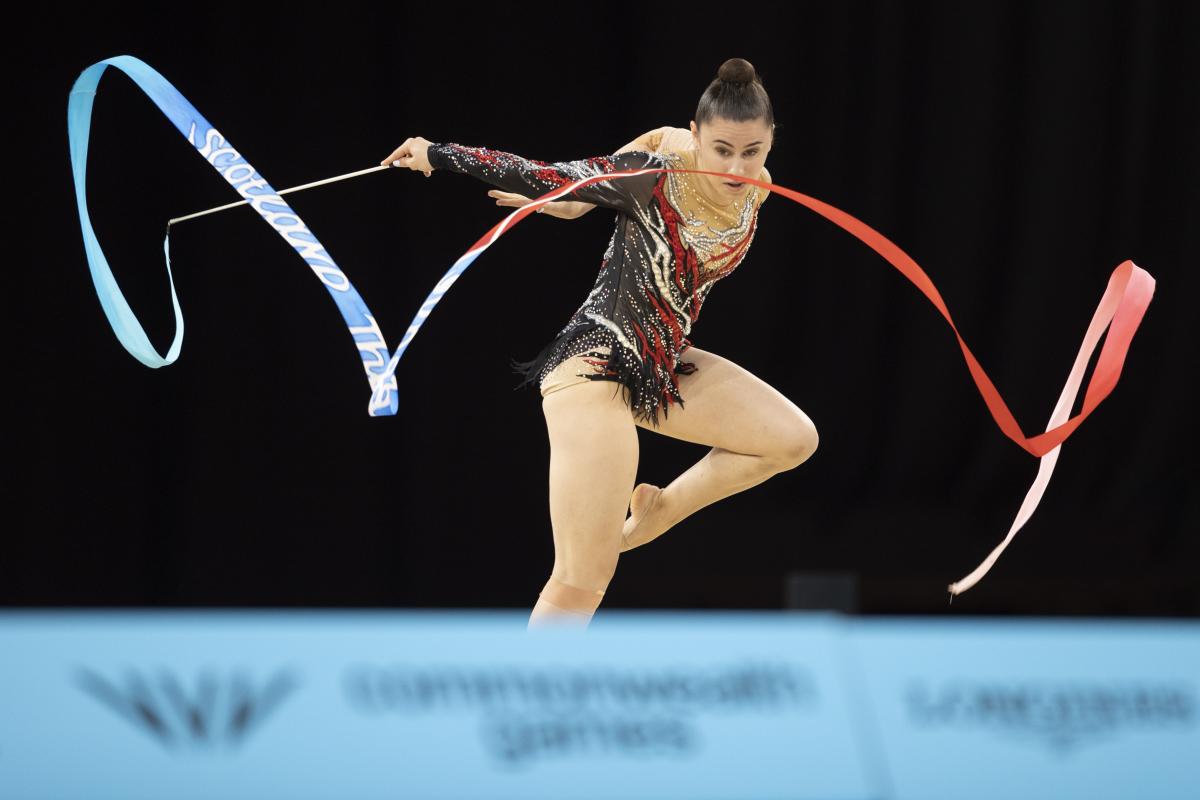 After each gymnast performed, all eyes were on the scoreboard and one by one, their routines fell short of Louise’s. The television camera zoomed in for her reaction every time and her smile grew as it became apparent she would win a medal. We held our breath as the penultimate competitor Carmel Kallemaa’s score was announced. She was 0.05 points behind, and Louise was guaranteed silver with only Joe Ee NG to come, who had earlier been crowned champion in the ball final. The Malaysian once again put in a performance with an exceptionally high value of difficulty to score 27.800 and was rewarded with her second apparatus gold.

Louise Christie had made history for Scotland, winning the first ever silver medal in rhythmic gymnastics at the Commonwealth Games. Speaking after the presentation, she said:

I can’t really put into words how I’m feeling. It’s amazing, it’s surreal. I think it’s going to take a long time to sink in – but I have a silver medal round my neck!

“I am so proud to wear the Scotland tracksuit and have this historic medal. Hopefully it can inspire the next generation coming through in Scotland – and that these results are possible in rhythmic as well.

“Competing here means everything. I think I’m quite bad at putting a lot of pressure on myself and it can make training really difficult but to be here now with the medal is so worth it. Every routine I’ve been so proud of and I’m just so thankful for everyone who has supported me along the way”.

When asked if she had a message for the young gymnasts in the club back home’ she said: “Thank you! I know you all had a bit of a party with flags watching me compete, you’ve played such a huge part in supporting me. Onwards and upwards – I’m sure there’s more to come!”

In the hoop final, Gemma Frizelle from Wales won the Commonwealth title, thanks to her score of 28.700. Anna Sokolova (Cyprus) took home the silver, with Carmel Kallemaa from Canada winning bronze. Malaysia’s NG Joe Ee scored 29.700 to win the gold in the ball with Suzanna Shahbazian securing silver for Canada and bronze going to Anna Sokolova from Cyprus.

This was a great day for Scottish rhythmic gymnastics. Louise has shown such dedication and worked hard to be selected for the Commonwealth Games. She has been a “beacon” to younger gymnasts in her discipline.

For as long as she could remember, her biggest goal in gymnastics was to represent Scotland at the Commonwealth Games. She was inspired by Glasgow 2014 to keep pushing, keep driving, and with the help of her supportive family, she has now achieved what she wanted to in the sport, and more. Today Louise was rewarded with silver success on the world stage. Congratulations Louise and congratulations to coach Amy Stewart!

With the final gymnastics’ medals awarded, the competition at Arena Birmingham comes to an end, with only two more days of sport at the Birmingham 2022 Commonwealth Games. Congratulations to all the gymnasts who represented Team Scotland, and to their coaches and support staff who have helped to deliver a brilliant home Games.

> Missed any of the competition? You can catch up now on the BBC iPlayer