CAITLIN AND FRASER EXCEL AT EUROPEANS Caitlin O'Brien has won a silver medal at the at the Trampoline and DMT (Double Mini Trampoline) European Championships in Baku, Azerbaijan.

The City of Edinburgh gymnast along with senior women's DMT team mates Kirsty Way, Phoebe Williams and Ruth Shevelan earned silver for Great Britain, after being narrowly beaten into second place by Russia who finished a mere half point ahead to win the gold.

In the individual event, Caitlin finished third equal in qualifying with a huge personal best of 66.700, but was placed fifth on countback. Only two gymnasts from each nation were able to progress to the final, so Kirsty Way and Ruth Shevelan went on to the finals having finished slightly ahead of Caitlin, with Kirsty going on to win gold for GB.

Two Foot Higher's Fraser McLeod was also competing for GB in the junior men's DMT competition. He finished seventh in qualification on a score of 69.200 to earn his place in the finals where he produced an excellent routine to score 66.60 and finish fifth. Fraser came close to winning a medal in the junior men's team event, but they were unable to replicate their third place from qualifying, and finished fourth. 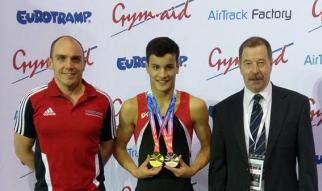 Congratulations to both Caitlin and Fraser and their personal coaches for a great campaign and representing your county and club so well.

Full results can be found here