Scottish U14 men’s champion Reuben Ward, pictured below, (Manchester Academy of Gymnastics) won British titles and gold medals on pommel horse (13.500) and vault (13.00) both scores contributing to his all-around silver medal, finishing on a total of 73.800.

West Lothian Artistic Gymnastics Club’s Cameron Lynn, pictured above, won the U16 British Championship on vault. Qualifying for the final in top spot he kept his nerve to produce two fantastic vaults, his execution score of 9.300 earning him the title on a combined score of 13.325.

In the women’s disability masters Orianne Slater, pictured below, from Garioch Gymnastics Club became British Champion, against a large field of competitors on vault (11.250) and floor (11.400) and won a bronze medal on the uneven bars. 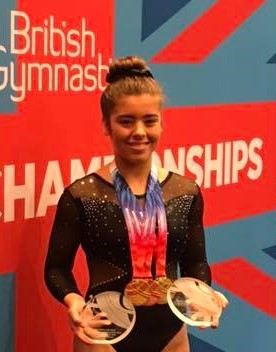 The men’s senior competition saw Pavel Karnejenko (Notts) compete in the oldest age category for the first time at this competition where he held his own against a host of GB senior gymnasts to earn a fifth place in the all-around competition (80.550) second place in rings. In the men’s masters finals, he earnt two bronze medals vault (14.187) and rings (13.400) against tough competition.

City of Glasgow’s Rory Smith produced great routines to finish sixth in the U16 men’s all-around competition. Rory qualified for the ring’s apparatus final in fourth place and went one better to earn a bronze medal on 12.300.

Congratulations to all gymnasts and coaches for qualifying for the British Championships.