Scottish Gymnastics is saddened to hear of the death of two long-standing members.

Gill Macdonald and Pat Reith were highly respected within the acrobatic community and were made honorary life members of Scottish Gymnastics for their significant contribution to the sport in this country.

Our thoughts are with Gill’s and Pat’s families and friends.

Our thanks to their friends for kindly sharing their personal tributes with us.

Claire McLauchlan
Former gymnast and fellow coach
Gill founded Bishopbriggs Acro in 1983 and remained coaching at the club into her 70s. After stepping back from coaching, Gill retained a keen interest in the club’s progress and competition results.

Gill was a proud coach of countless gymnasts over the years, and she was also an encouraging mentor to many gymnasts who progressed to become coaches. Gill devoted so much of her time to the sport not only through coaching, but also judging regularly and volunteering on technical panels over the years. There is absolutely no doubt that the sport of acro gymnastics in Scotland benefitted hugely from Gill’s contribution, particularly in the early years.

At the club, we count ourselves lucky to have learned from Gill and it is important to us all to continue her legacy of nurturing talent and making gymnastics accessible to everyone. We, like Gill, firmly believe in the importance of sport and our passion for gymnastics will ensure the club continues to succeed in the same way that it did under the guidance of “Mrs Mac”.

Lorna Beattie
Former gymnast and fellow coach
Pat was inspirational in the biggest sense of the word, a true legend of a lady. She touched the lives of hundreds if not thousands of young people in her time as a coach and teacher, working tirelessly to help and support them. Pat’s excellent knowledge of the sport combined with her amazing ability to build positive relationships with young people made her one of the very best in the sport.

I was lucky enough to have been coached by Pat as a gymnast, then mentored by her as a young coach and finally to have coached alongside her as a more senior coach. I will be forever grateful for what she taught me.

I share a love of not only gymnastics but also art with Pat and am proud to have her work displayed in my home. It’s thanks to Pat that I now work as a teacher and strive to help young people every day just like she did. A small lady with a large personality, a force of nature and a heart of pure gold. Pat will never be forgotten. 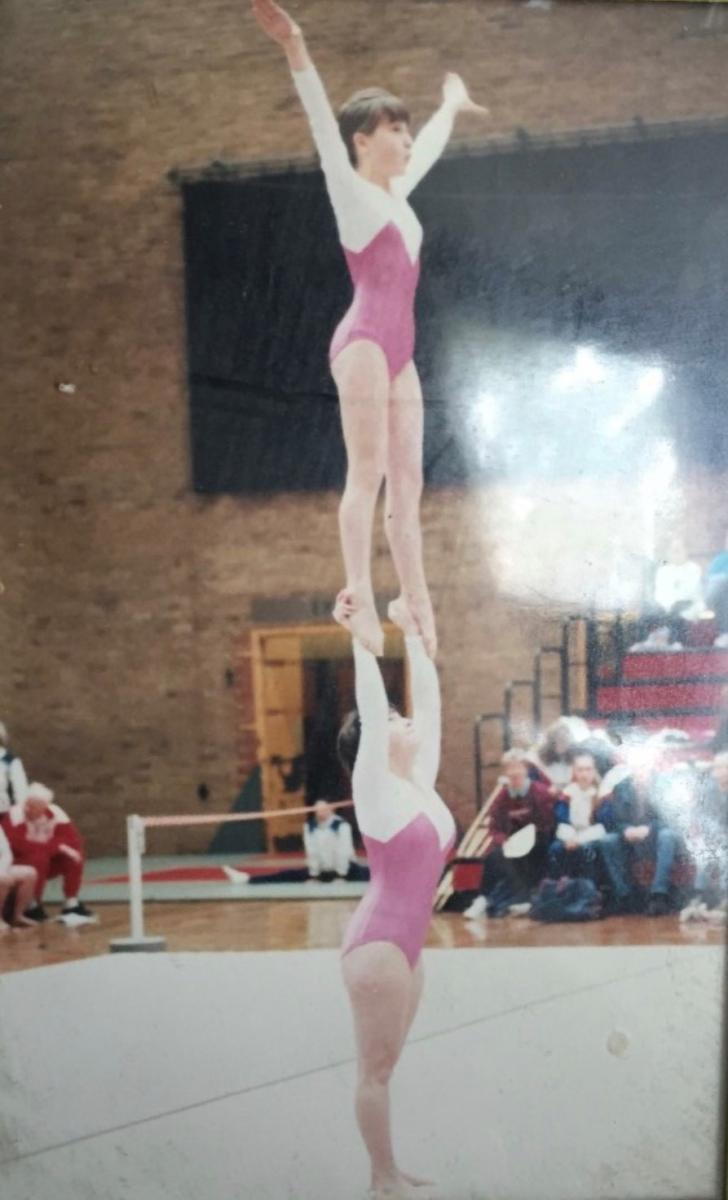 Leanne Newlands
Former gymnast
Pat Reith was my coach for 12 years at Maryhill Mercury, her first club. She was a fantastic coach, took no nonsense, looked after us all in the gym and also out of it too.

She was such a huge part of my childhood and young adult life. I honestly feel she shaped me as a person with the dedication and discipline through gymnastics.

I’m so sad to hear of Pat’s passing. She will be a massive loss to Scottish Gymnastics, her family and everyone that’s known her. I’ve included a photo from the 1996 British Championship that she was so proud to have taken myself and Caroline Davidson to.

Debbie Stewart (Hall)
Former gymnast and fellow coach
Although Mrs Reith was small woman she was a force to be reckoned with. From the age of 10 when she was my coach in four-piece gymnastics at The Allander Sports Centre, where she terrified the life out of me, to then taking myself and Angie to Maryhill Mercury at the age of 12, by which point I knew she wasn't quite as terrifying as I thought, she was a massive part of my life.

Throughout my childhood I spent all of my spare time at gymnastics where Mrs Reith imparted her vast knowledge, allowing me to achieve my coaching qualifications and I then supported with coaching the younger gymnasts. She also helped me attain my judging qualifications as she was also an excellent judge and would regularly juggle coaching and judging at competitions.

She also had a great sense of humour and on trips down south to the British Champs she would give a rendition of 'Patricia the stripper' on the bus to everyone's amusement. When I saw her at her 80th Birthday I couldn't believe she looked almost exactly as she did when I was a kid.

In short she was an amazing woman who dedicated her life to gymnastics and achieved so much. She was such an inspiration to so many people - she will be greatly missed.

What a woman! I first had the pleasure of meeting Mrs Reith at Drumchapel Gymnastics Club (four piece), she was one of the head coaches, I was in a beginners' group.  To be honest , I looked up to those top gymnasts and wanted to be in that group, with the wee woman with a huge voice, scary but definitely driven!

She also coached at Allander and asked if I wanted to move there, I was thrilled she had noticed me, so from Dumchapel to Bearsden, I moved up in the world.  Spent a bit of time there, before she told me about Sports Acro at Maryhill Mercury, no idea what it was but was determined if she was there I wanted to be there too.

Maryhill Mercury was a huge part of my life,  I made many new friends which I still keep in touch with now.  Mrs Reith was a hard task master, I am so thankful for that as I don't think I would have been the gymnast I became getting the opportunity to compete in Scottish & British Championships and also selected for Scotland.  Mrs Reith spotted potential in so many young people, gave me the opportunity to travel throughout the UK and I was also supported to compete abroad in Vienna and Budapest.

She spent endless nights in the gym and gave up her weekend to support gymnasts to develop not only their gymnastic skills but encourage them to volunteer and become coaches and judges.  She even got my mum involved. Her understanding of families who attended the gym, who maybe didn't have money for fees or new leotards, we never went without.  One question I wish I could ask Mrs Reith, "who picked our purple and red leotard?" It was awful.

Mrs Reith has been so influential in my life, I believe the type of work I am involved in now is down to her leadership skills.  She instilled a belief in me that anything can be achieved with the right attitude and commitment, she definitely proved that when Maryhill Mercury was very well represented in many a Scotland squad.  Thanks for everything.