Eleven women’s artistic gymnasts were recently on Scottish International duty at the Combs-La-Ville International in Paris and the Sandra Clarke Cup in Nottingham.

At the start of the month Ellie Patrick (Dynamic), Crystelle Lake (City of Glasgow GC), Kirsty Fowler (City of Aberdeen GC), Taylor Richardson (City of Glasgow GC) and Kennedi Foster (Hamilton GC) were selected to represent Scotland at the Combs-La-Ville International competition in Paris where the youngest gymnast of the team, Kennedi Foster (pictured bottom), qualified for the floor final and earned a silver medal producing a lovely routine to score 12.300. 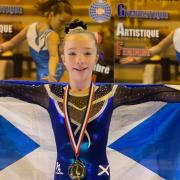 Performance Manager (Olympic Disciplines) Jamie Bowie, who travelled as Team Manager, said: “It was a really great development opportunity for gymnasts on the National Performance Programme giving them the chance to gain valuable experience on the international stage.”

Congratulations to everyone who has represented Scotland at these events over the last few weeks!