Eight gymnasts and their coaches attended Sunday’s camp having been selected following the profiling day at Lilleshall National Sports Centre in November. They were also involved in a successful routine evaluation session at Beacon on the Saturday. This was for gymnasts across Scotland, with 36 in total taking part and receiving technical feedback from judges on their routines. 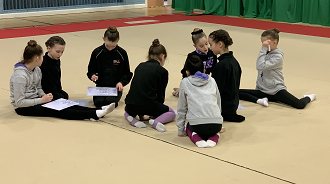 Sunday’s camp started with a blast of excitement from gymnasts and coaches as everyone got to know each other during some ice-breaker games.

Ruth Wilson led the day and was supported by the four coaches from the rhythmic coach development programme. There was also ballet input from Ballet West’s Sayward Harris.

The programme focused on “brilliant basics” for the pre-espoir and espoir gymnasts, spending the morning working on ballet, body preparation and conditioning. 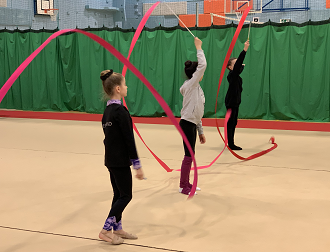 In the afternoon, they focussed on clubs and ribbon handling developing their skills towards future junior pieces and worked on the judges’ feedback from the previous day.

The was also a session for parents called “supporting your child in their gymnastics journey” as well as a coaches’ planning session.

Gymnasts will return for the next PPP camp in March at which there will also be a development clinic for espoir gymnasts.

There was a further boost for rhythmic gymnastics in Scotland with Beacon’s Louise Christie, coached by Laura Ytre-Eide, being selected onto the British senior squad for 2020, after being invited to attend senior squad sessions during the latter part of last year.