Banchory Trampoline & DMT Club set a challenge to other trampoline clubs around Scotland to join in with a game of "tag on." Head coach Melanie Stewart Wills tells us how this helped the trampoline community come together during the recent lockdown.

During the previous lockdown, Scottish coaches held a weekly quiz which was not only good fun but a great way of staying in touch with other coaches and clubs.

I then asked if they would be up for a bit of fun by playing "tag on." Normally this would be played on the trampoline where one gymnast starts with a move and the next gymnast does that move plus one of their own. Moves must be completed in the correct order.

Our game was to be with conditioning exercises, and we hoped gymnasts would play along at home. John (Wills) and I started the challenge off with 10 squats and then challenged Dynamite to add on the next move, which was to be 9, then the next club 8 etc working down to one, which was a minute's plank. By the end, we had quite a workout routine going!

This ran between Monday to Friday over two weeks and was such a fun thing to do and helped us to all work together to stay connected. It was great when outdoor training was allowed and we could have some gymnasts join in the workout, although the idea was it was always coach-led. We showed this every day on our Facebook and Instagram pages, and I believe other clubs did too. 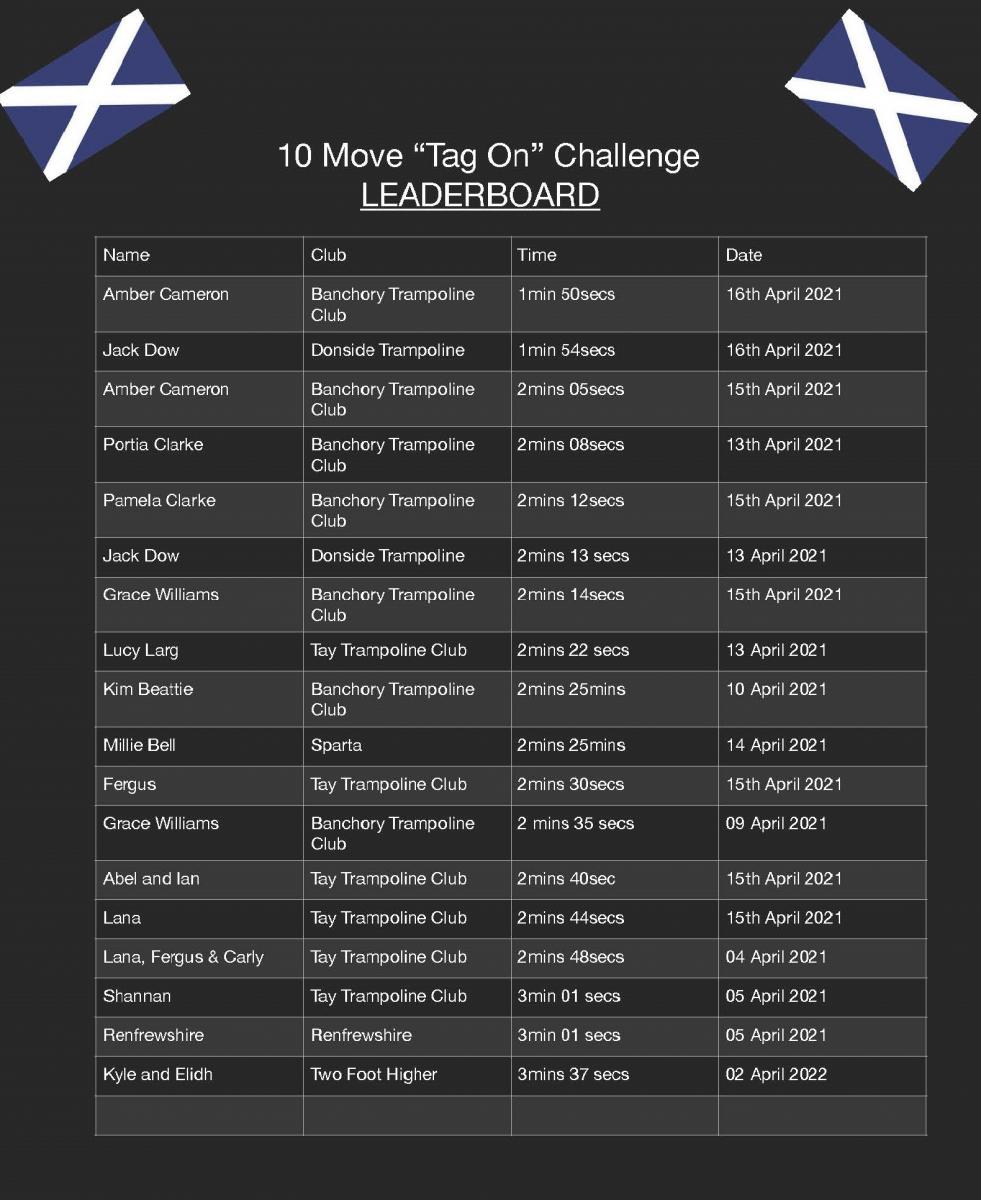 Gymnasts join in
Once the coaches had finished the 10-day challenge, the next challenge was set for gymnasts to try and beat the final time from day 10. The response was fantastic! Clubs which had not been part of the original game joined in too. We set up a leader board to show everyone the top times and we showed videos that we were sent from gymnasts and clubs. Clubs used this as a workout within their training sessions and individual gymnasts worked on this at home. The age range over the time was, I think, 5 to 74! Other family members had a go at our challenge as well - it was open to everyone.

Clubs involved from the start were Banchory, Dynamite, Renfrewshire, All Star Elite, Two Foot Higher, Tay and Sparta. We were delighted that Donside took up the challenge as a club. Many gymnasts submitted times, but we had two who kept trying to decrease their time, sent in multiple videos, and were declared the champions: Jack Dow from Donside and Amber Cameron from Banchory.

Jack and Amber put so much effort into this, they were both winners. It wasn't so much about the winning as taking part and we were absolutely delighted that so many got involved from all over Scotland and we would like to thank all those who took part.

The idea was to bring clubs together, but we are always up for a challenge and so will probably do another one sometime. Sparta offered the next challenge to gymnasts and clubs to complete a one-minute handstand every day until 26 April. We hope other clubs will set challenges too.

Thanks to Melanie and to Pamela Clarke for their story and video.