There were seven new Scottish champions named as part of the 2022 Scottish National TeamGym Championships and Thistle Tournament which took place at Meadowmill Sports Complex between 4 and 5 June.

The competition, which saw TeamGym gymnasts competing for a championship title for the first time since 2019, returned to East Lothian with teams from as far North as Dingwall travelling to showcase their tumble, trampette and floor routines.

It was a fantastic two days of competition, with an exciting range of skill levels on show – including both junior and senior gymnasts who were recently selected to represent Great Britain at this year’s European Championships in Luxemburg.

It was the junior level two women’s team from Irvine Bay who claimed the first championship crown, with gold medals awarded to the nine gymnasts who competed on day one after they scored a total of 39.35.

There was a very close competition in the youth level three competition, with a tie break rule deciding the championship winners and only 0.20 points between all of the teams. Fyrish took the top podium placing, with their overall score of 35.40 and winning finish on two out of three of the apparatus competitions including a thrilling floor routine which gave them a 1.20 point lead going into the final rotation.

Congratulations to the primary level four team from Forth Valley who also became Scottish champions with their final score of 31.65. 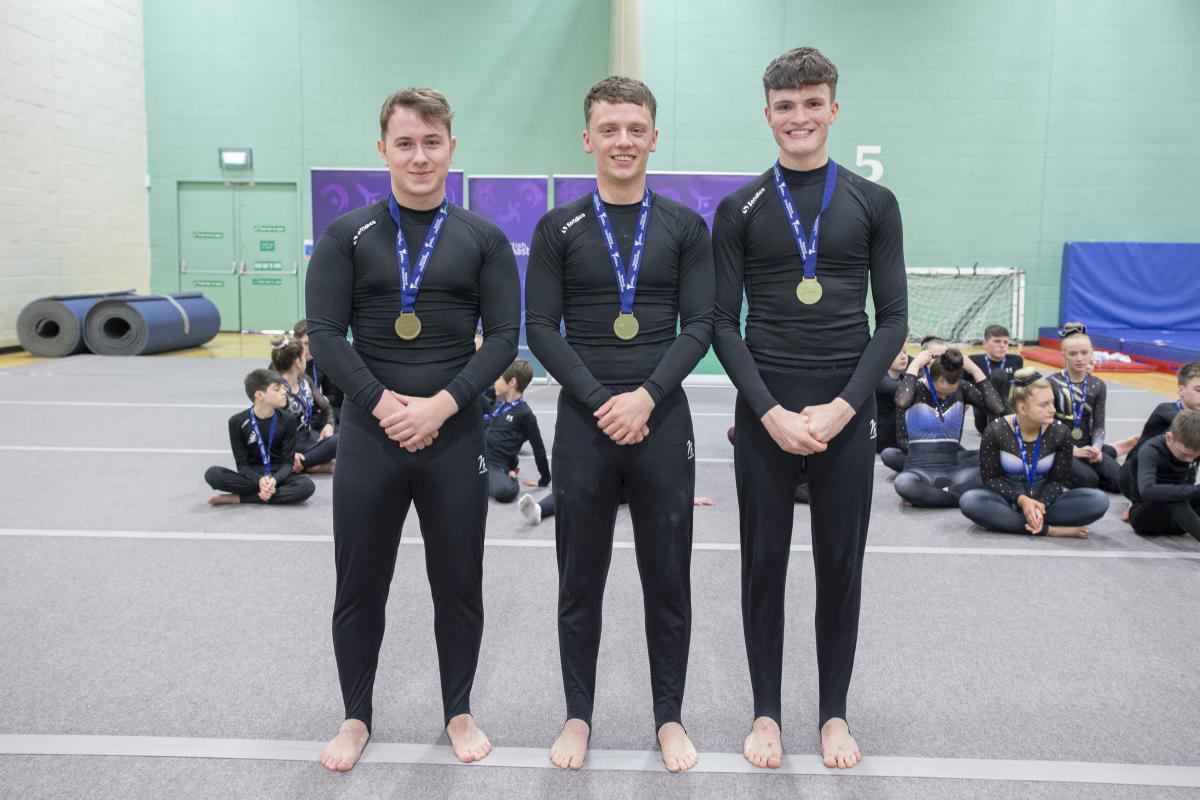 It was gold medals galore for Saltire in the micro team competition with wins in the senior level one, youth level three and primary level four categories.

Three time European Championships veteran Dylan Campbell along with Saltire teammates Callum Cairns and Josh Cantell, who will be making his European Championship debut as part of the GB junior men’s team swooped to gold with a final score of 25.35 and a series of impressive passes on the tumble track.

At youth level, the mixed team from Saltire of Aidan Hepburn, Hayden Turnbull, Holly Wilson and Kerr Golightly took gold, with their tumble routine helping them to a 2.40 point lead in their category.

Execution scores were equally high for their primary level four counterparts who ended their competition with a total score of 22.95.

Forth Valley’s Brooke Angus, Evan Dewar, Joshua Dewar, Lucy Burns and Ryan Aitken took gold in the junior level two category with an overall score of 25.90 a full 2.10 points ahead of the second place team from Saltire.

The Thistle Tournament provided an opportunity for gymnasts competing at different skill levels to their usual age category a chance to win medals with 15 micro teams taking to the competition floor over the weekend.

Congratulations to the gymnasts and their coaches for a fantastic competition, and we look forward to supporting Scottish gymnasts at the European Championships later this year.

Wendy Purdie, Scottish Gymnastics performance manager said: “Following the success of Scottish gymnasts at the European Championships last year, it has been great to follow the progress and development of those who also competed at the 2022 Scottish Championships and those who have been selected onto our new performance programme for TeamGym.”

The championships and thistle tournament was a fantastic opportunity to watch some of Scotland’s top TeamGym gymnasts before they prepare to compete as part of the Great Britain team in September. Congratulations to all of the gymnasts for their hard work, and well done to the coaches who continue to develop their teams.

You can view full results from the competition below: