Three Scots were crowned British champions at the 2019 Trampoline, Tumbling and DMT British Championships at the Arena Birmingham last weekend.

Sophie Campbell from Sapphire Gymnastics Club (middle picture) stormed to victory for  the gold medal in  tumbling FIG women’s 11-12 category improving on her bronze medal from last year. Sophie, who is part of the  tumbling Performance Pathway Programme (PPP) qualified in top spot ahead of a large field and held onto her lead in the final to score 91.500. She is also a finalist in the  Junior Gymnast of the Year category at the Scottish Gymnastics Awards.

> Find out about the Scottish Gymnastics awards.

In double-mini trampoline (DMT) Morgan James from Banchory Trampoline Club (top picture) became British champion in women’s 17-21 category in her first year of that age group. Morgan was in the top three in every pass, earning the gold medal on a final score of 131.400.

Nicolas Smith from Aspire Trampoline Club (bottom picture) became the third British champion from Scotland earning the gold medal in the Category 1 15+ Disability Trampoline competition. Nicolas led from the outset and won his title on a final score of 91.00. The 17 year-old, who was the first Scottish gymnast to be selected for the Great Britain disability squad, qualified for the British Championships after an impressive Spring Series competition, setting new British records for high scores and difficulty.

Keir Davidson from Tiggers Trampoline Club qualified for the final of the men’s FIG Performance Level age 13-14 trampoline competition in third place. He performed well to maintain his position and earn a bronze medal on 145.170

It was also a special weekend for Scottish Gymnastics gymnast ambassador and senior DMT gymnast, Kim Beattie, from Banchory Trampoline Club. She was awarded a Master Gymnast award from British Gymnastics in recognition of her contribution to the sport in representing Great Britain at the 2017 and 2018 World Championships. At this year’s British Championships, Kim just missed out on defending her British title winning the silver medal on 135.700 just behind Kirsty Way (OLGA Poole)on 137.500. 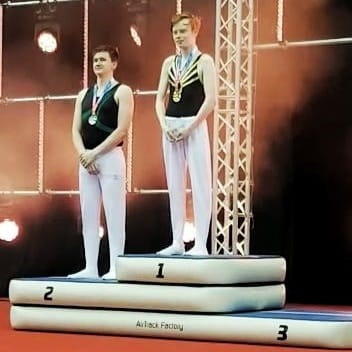 Congratulations to everyone who competed in the championships.