Two Scots won medals in DMT and tumbling at the 2022 World Championships and Age Group Competitions in Sofia, Bulgaria.

Kim Beattie from Banchory Trampoline and DMT Club was competing in her fourth worlds which took place between 16 and 19 November. It was a return to Sofia for Kim, having won her first of two world team silver medals there in 2017 as a 19 year-old in her debut championships.

This time round it was her fantastic performance in the team event which earned a bronze medal, contributing to Great Britain’s most successful championships in these disciplines and their tally of nine medals topped the table.

In individual qualifying on the opening day, Kim finished with a combined score of 50.000, just missing out on the final. However, her scores helped the team qualify in top place for the team final the following day. Her score of 26.200 was the second highest of the final and top of her group, putting GB in second place with the last group still to go. However, a score of 25.800 from each Australian gymnast won them their first championship title for a generation and Great Britain finished in third, narrowly behind the United States of America. 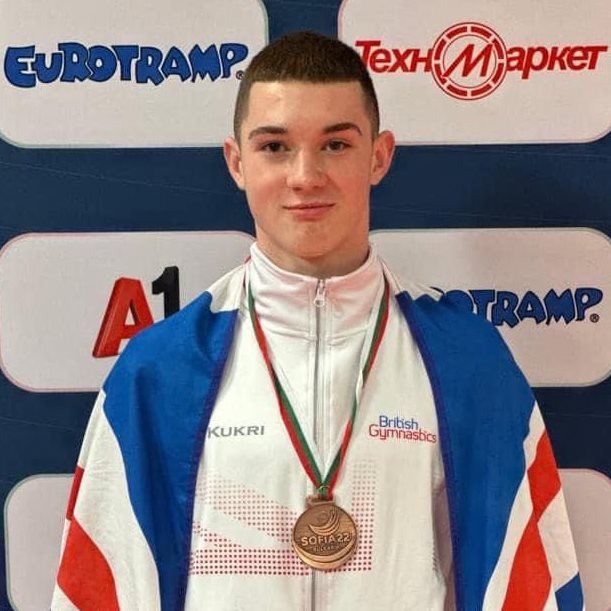 A week later, Kim’s success was followed up at the World Age Group Competitions when Aaron Steel from Durham City Gymnastics Club won a bronze medal in the men’s tumbling 13-14 age category on Saturday 26 November. Aaron, who was previously part of the Scottish tumbling performance pathway programme, qualified for the final in second place behind Great Britain teammate Otis Mason with a combined score of 48.000 from two runs.

In the final, this tough tumbling event requires the top eight to complete one run, with the top four from that going into a second final to decide the medal winners. In final one, Aaron was again just behind in second, easily qualifying for the top four. In the second final, he slipped back to third with his lowest score of the competition, however, he still secured a podium finish, with Otis winning gold.

Lois Anderson from Sapphire Gymnastics Club was competing in the women’s tumbling 13-14 category the same day. She was third in qualification, a 0.200 penalty on her first run for a total of 44.900 put her just behind GB teammates Scarlet Parchment and Alicia Field. Their scores of 45.000 saw them through to the final on the two qualifiers per country rule, and sadly Lois missed out.

Ava Fettes was also in action on Saturday in women’s double min-trampoline 15-16. The Banchory Trampoline and DMT Club gymnast scored 46.800 to finish in 11th place in qualifying.

Trampoline gymnasts Keir Davidson from Tiggers Trampoline Club and Sarah Gallacher (Sparta Trampoline Club) were in action on the opening day of the world age groups on Thursday 24 November. Keir placed 20th in the large field of 74 in the individual men’s 15-16 group. In the equivalent category in the women’s competition, Sarah finished in 23rd.

Sarah was in action again the following day, in the synchronised competition with Gabriella Moorhouse (Leeds Rebound), their score of 44.360 was fourth highest overall, and enough to see them through as second qualifier in group three. The pair did well to improve their score in final but missed out on a medal coming in fifth.

Ethan Cunningham from Jump Gymnastics Club was also selected for men’s tumbling 17-21 category but sadly had to withdraw before the event.

Congratulations to Kim and Aaron on winning world medals and well done to Lois, Ava, Keir and Sarah on representing Great Britain.