Both gymnasts made the same final back at the Gold Coast 2018 Games. Frank, who qualified for the final in eighth place, competes in his third final of these Games, following a seventh place in the all-around final on Sunday, and yesterday’s floor final where he came sixth.

For Hamish, an NCAA all-around top ten finisher, the horizontal bar is his favourite piece of apparatus. His terrific qualification score of 13.500 put him into a positive seventh place going into the final, just one point behind the top qualifier of the day, England’s Joe Fraser. Joint silver medallist from 2018, England’s James Hall was the only returning podium finisher from that event hoping to retain a medal placing on this apparatus.

First up in the final is Australia’s Tyson Bull who qualified in second place with his score of 14.150, in what has been an impressive performance for the Australian team at these Games. He performs a thrilling routine, with some technically difficult catch and release elements, including a Kovach and he swings with ease through the routine ending with a full twisting double straight dismount. It’s a great start to the round, and he sets the bar with a score of 14.233. 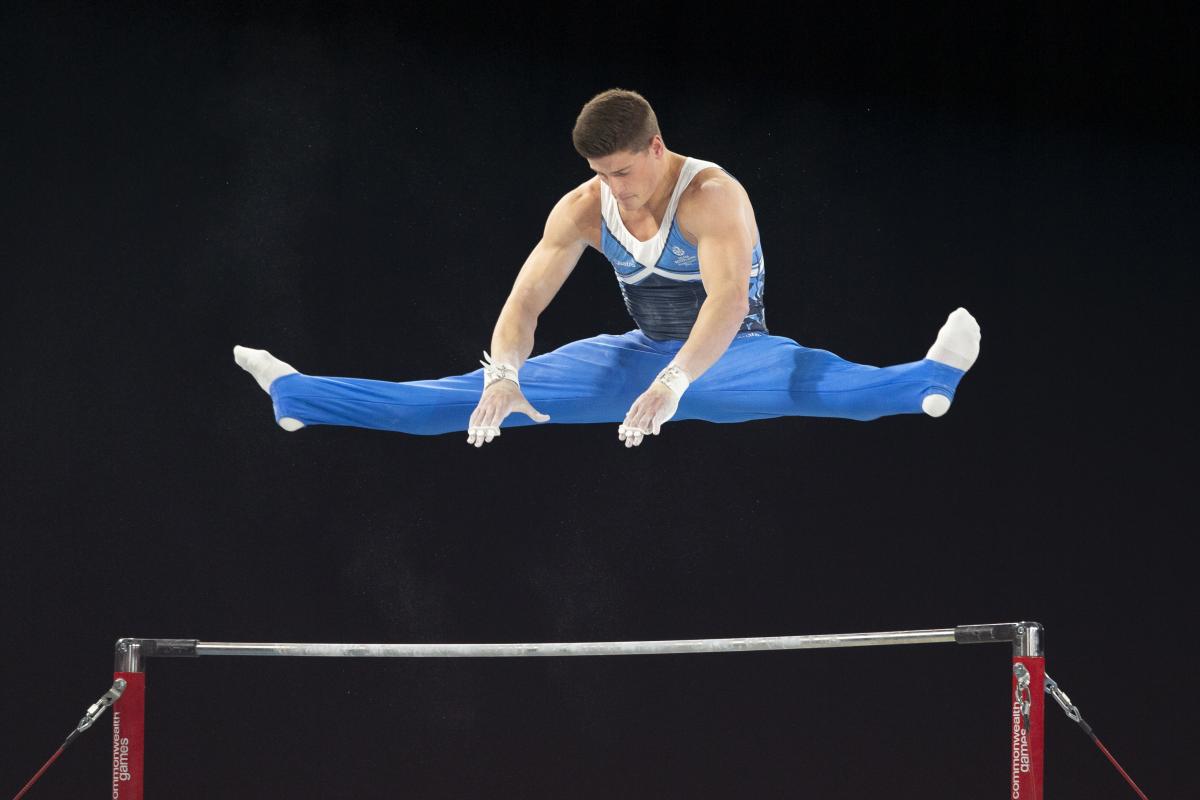 Frank is the third gymnast to compete in the final. He’s upped his difficulty for this final, with a change to the routine he performed in qualification, with some exciting new catch and release elements – giving it his all for the final.

Frank starts off well with an ambitious routine for his final performance at the games. He performs a great release with a half turn but comes off during his next twisting somersault – a Coleman. He gets back on combines a couple of lovely release elements, starting with a straight and followed by a pike release over the bar. He turns nicely and winds up to end with a full twisting double straight for 11.900

Hamish Carter is the second last gymnast to take to the horizontal bar. The score to beat for a medal placing is 14.133 from Australia’s Michael Morgans who is currently in third place. 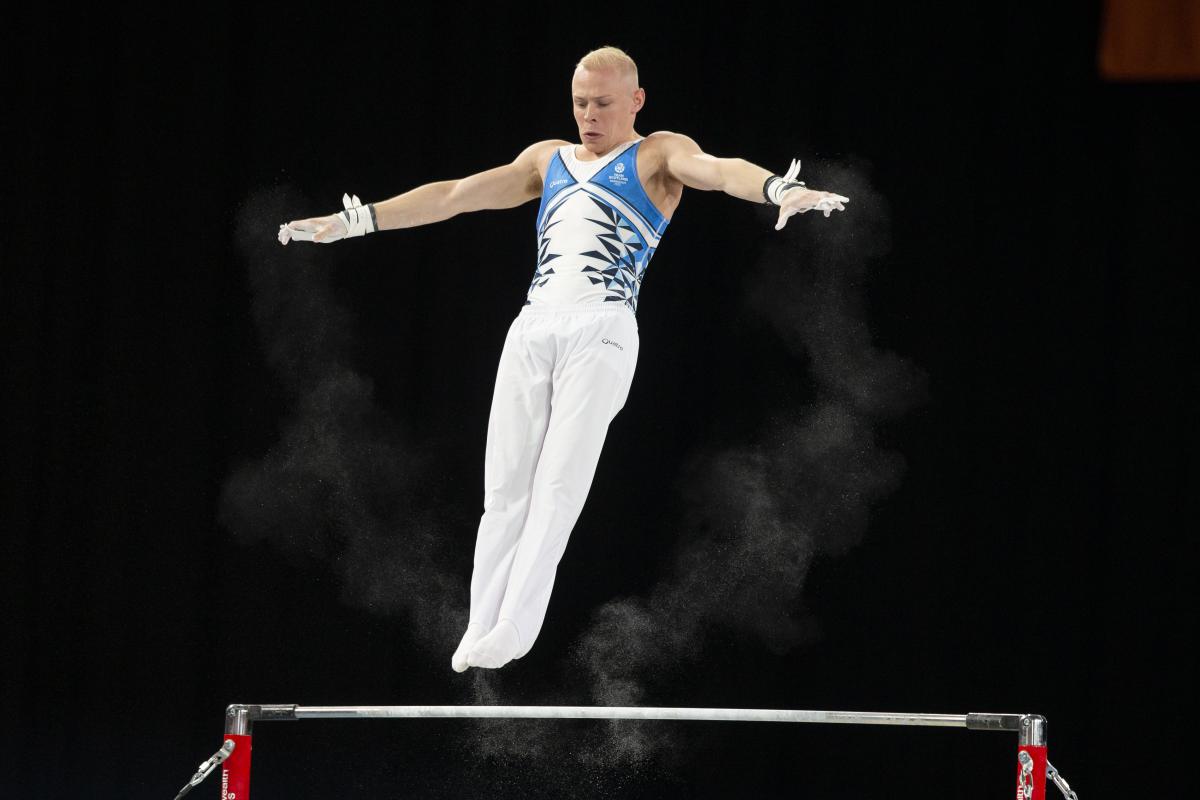 Hamish is ready for the final - but takes an unfortunate early fall in the routine which will cost him in the final scores and rankings. He recovers well after getting back up on the bar for the rest of the routine - with some strong elements, controlled pirouettes and swinging with good rotation and momentum. He prepares for his dismount and its good, but it won't be enough with a score of 12.433 and he goes into fifth place.

Only one gymnast to come with Bull still leading the field and Marios Georgiou of Cyprus in second on 14.133. Could his compatriot Ilias Georgiou upset the standings with the last routine of the men’s artistic competition? With the highest-level difficulty of the day, Ilias backed it up with the best execution score to finish with a massive 14.466 and take the gold medal. Hamish ended his competition in sixth – an improvement on his eighth place in Gold Coast – and Frank finished in eighth.

Speaking at the end of the men’s artistic competition, Frank said: “I’m really happy, I qualified in last place for the final and I knew I had to up my start value if I wanted to get anywhere near those medals. I added in new skills and unfortunately it didn’t pay off – I used my one good go down in the warm-up gym.

It was a real honour to be out there with Hamish, Joe, James and the guys from the other countries. It’s something I’ve really enjoyed. 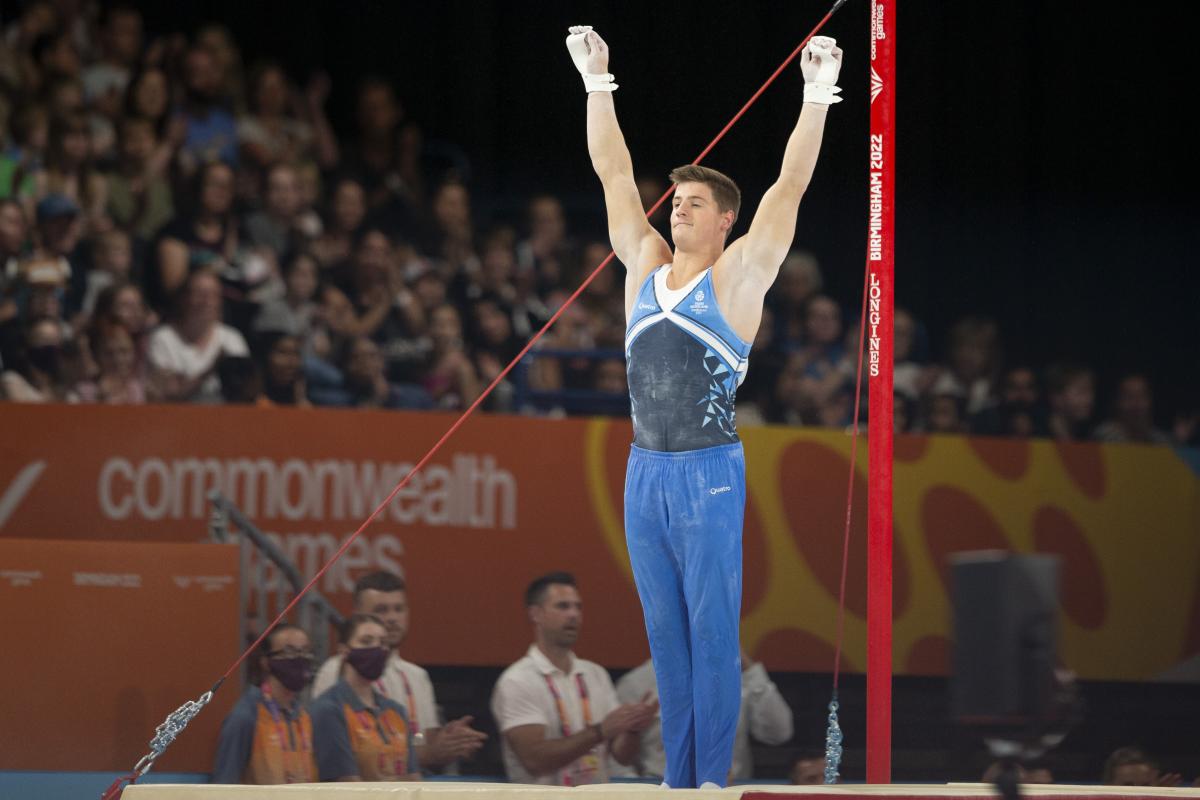 Hamish said: “I was trying to do some new connections in my bar routine today, it didn’t quite pay off, but I’m happy with the decision I was making – I wouldn’t have had it any other way. I was going for broke, and I knew it was going to be tough getting into the medals with such a strong line up. I did my my best and I hope in future there will be some more horizontal bar finals that I can hit.

To use my experience from the Gold Coast in these Games meant I was a lot calmer and less overwhelmed by the crowd and the noise and it gave me a chance to sit back and actually enjoy the competition.

In the day’s other finals England’s Jake Jarman picked up his fourth medal of the games so far on vault. Giarnni-Regini Moran secured silver – a lovely way to celebrate his 24th birthday with Australia’s James Bacueti winning bronze.

On parallel bars, home gymnast Joe Fraser (England) performed parallel bars mastery for the highest score of the competition with 15.000 – virtually unbeatable for the rest of the competition. He claimed the gold, with teammate Giarnni-Regini Moran joining him on the podium in silver position for the second time today. Former Commonwealth champion Marios Gergiou (Cyprus) won bronze.

For the first of the women’s events, Australia took the top two positions on the podium on the beam, with Kate McDonald winning gold ahead of all-around champion Georgia Goodwin. Canada’s Emma Spence earned her third bronze medal of these Games.

The anticipated women’s floor final was the last of the competition, with crowd favourite and Olympic medallist Alice Kinsella hoping to make up for mistakes made in the all-around final. Team England’s Ondine Achampong gets the crowd cheering early on with a great routine and her signature twisting somersaults. She secures a silver medal ahead of Australia’s Emma Whitehead. When Alice Kinsella takes to the floor, she knows the score to beat, and it’s only her composure that will come between her and a medal. It’s not her best – but she scores 13.366 and claims the commonwealth title! Tears of joy and relief on her face, she’s done it!

After the stellar performances of the artistic gymnasts this week, there is now a break in the competition schedule to give us a chance to breathe after all the excitement! We are then looking forward to seeing Team Scotland’s Louise Christie making her Commonwealth debut in the rhythmic gymnastics competition between Thursday 4 and Saturday 6 August.

Well done to all our artistic gymnasts and coaches and thank you for doing us proud! All the best to Louise and coach Amy on Thursday!

> Missed any of the competition? You can catch up now via BBC iPlayer

Inspired by the gymnasts at the Commonwealth Games?