Shannon Archer has made history by becoming the first ever Scottish women’s artistic gymnast to win a medal at the Commonwealth Games.

The current Scottish senior champion’s success came during the first day of apparatus finals at the Birmingham 2022 Commonwealth Games where her steely determination and dedication was rewarded with a bronze in the vault.

Three other Scots were in action too after qualifying in the top eight during the team competition with Frank Baines, Pavel Karnejenko, and Cara Kennedy returning to the arena in the hopes of claiming a medal.

The competition focused first on men’s floor with rings and pommel horse later in the day with the women’s vault and uneven bars finals in between the men’s events.

In the first performance of the day on floor, Felix Dolci (Canada) performs a very strong starting tumble with a powerful double pike. His next is a full twisting somersault and he follows with a tumble combination with very strong landings on both elements. He lifts into handstand and then lines up for 2 and a half pike somersault and finishing up his routine with a triple twist. He sets the bar for this competition with 14.166.

Frank is the fourth to compete on floor following on from Emil Barber from Wales, who performs a stunning routine packed with complex twisting somersaults, and scores 13.800. Frank improves on his qualification and all-around scores on floor to achieve 13.566 – he starts off with a great double twisting somersault, immediately into a straight front. He follows nicely with a tight twisting somersault and takes a tiny hop on landing. He works the floor in Russian circles, rotating smoothly and then into splits. He finishes his routine with a full Arabian, with a small step on landing. It’s a difficult routine, performed confidently with a difficulty value of 4.600 and his execution score of 8.966 – leaving him in fourth place at the halfway stage of this final. 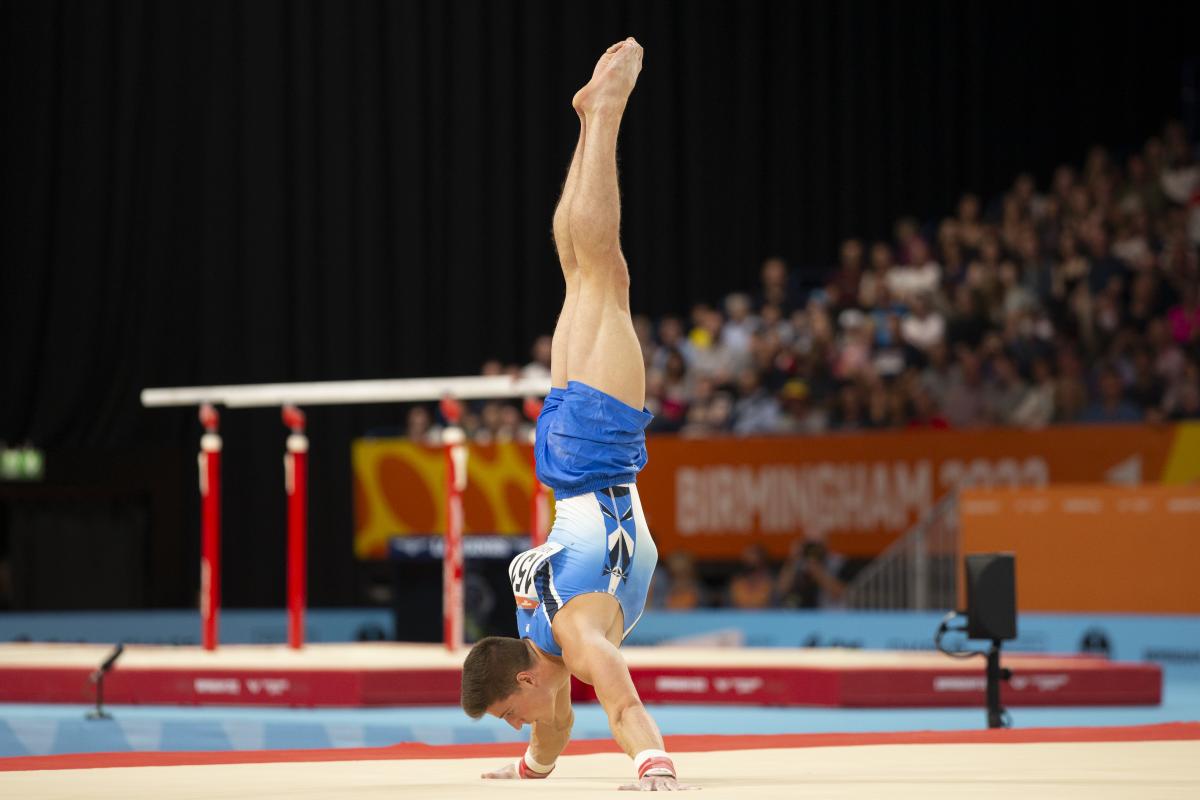 It's a high calibre of competition in the men’s floor final, with all-around champion Jake Jarman from England finishing with 14.666 for his third gold medal of these Games. Felix Dolci from Canada comes second with 14.166, and Giarnni-Regini Moran (England) takes home the bronze thanks to a great score of 13.966. Frank finishes in sixth place for Scotland.

"Congratulations to the medalists, it was some fantastic gymnastics out there today, so I’m really happy to see that and just be a part of it. The crowd out there was incredible, and they get behind everyone. The standard of world gymnastics these days is phenomenal, and I’m absolutely in awe of it – I couldn’t be doing any of the skills that Jake [Jarman] is doing.”

Cara, in her second Commonwealth vault final, looks to move up the leaderboard from her eighth place in qualifying. She starts with a full twisting Yurchenko and takes a small hop on landing to secure a good first vault score of 12.866. She prepares for her second vault, a layout Tsukahara and does well, stepping back on landing and scoring 12.400 – meaning she ends with an average of 12.633 and places herself into third at the halfway stage. Once all the athletes had competed, Cara finished in a credible sixth place, improving on her position in the Gold Coast Games.

Shannon qualified in first place after the team final hoping to match her performance when she scored 13.900, with her eyes on the top of the leaderboard and a potential medal. It was disappointment back in Gold Coast 2018 when she narrowly missed out on a podium place. 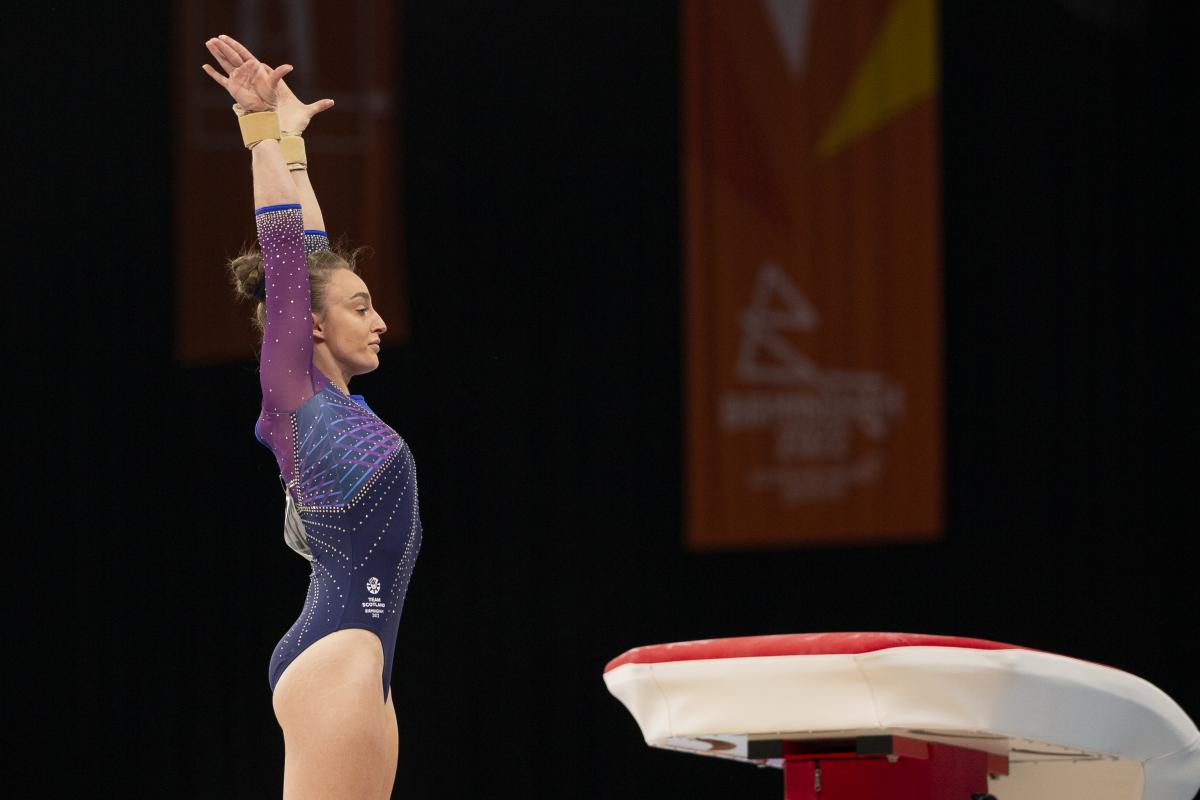 She starts with her brilliantly performed double twisting Yurchenko and takes a couple of steps on her landing, picking up a deduction for stepping out when steadying herself. It’s a great vault though, and the score to match, it’s 13.266. Her second vault, with a slightly lower tariff is expertly performed, landing with a couple of steps and looking up to hear the crowd cheer. It’s a 12.900 and it means she’s secured her place on the Commonwealth podium, in third position. And history is made. Shannon wins Scotland’s first ever Commonwealth medal in women’s artistic gymnastics.

Shannon said: “It’s definitely not sunk in yet. It’s never been done before and we did know it was possible, but we didn’t want any expectations going into the final. We just wanted to land my vaults and see what happens but I’m very, very happy to have this medal round my neck just now. I woke up this morning feeling the nerves. We knew I’d qualified first for the final and there was a chance it could happen but I just tried to block that out and focus on my vaults.”

Seeing that third next to my name, I just genuinely couldn’t believe it. It’s a massive relief that all the hard work I’ve put into this, me and my coaches, it’s all paid off. 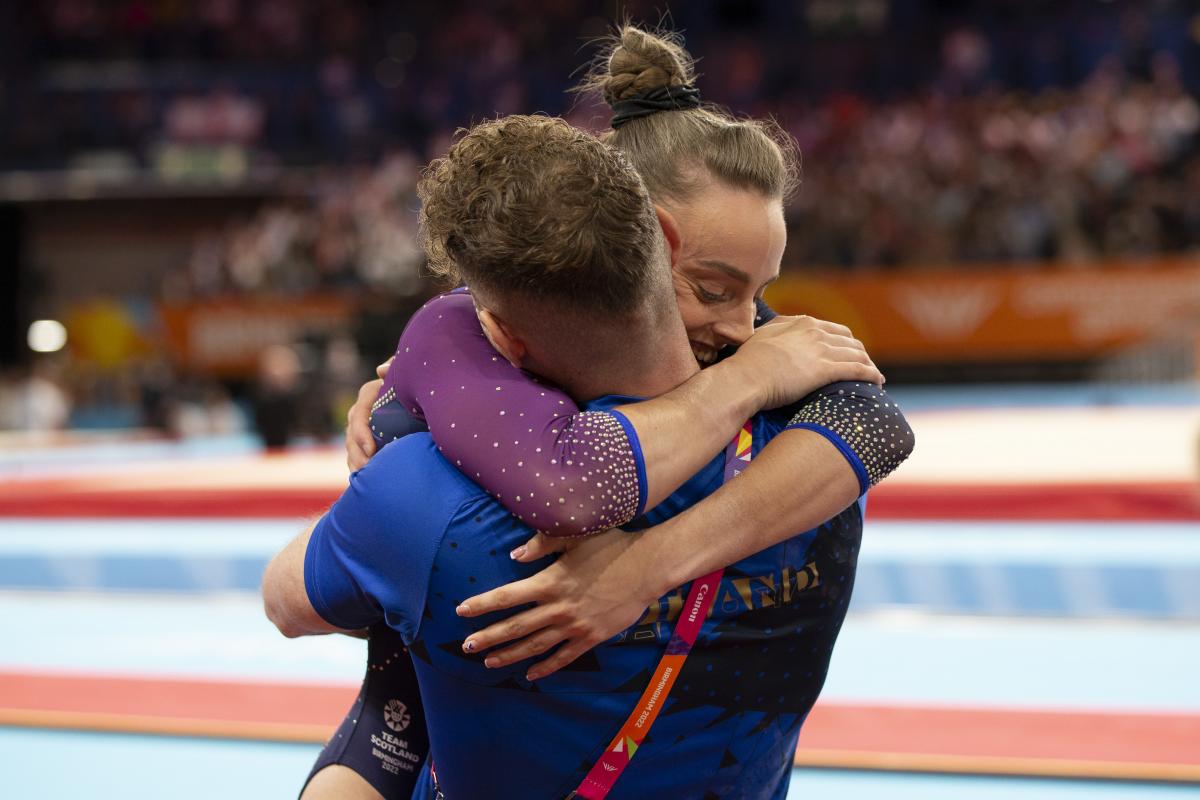 “I could definitely hear my family cheering when I was going for my vaults. I have my mum and my gran here, Gemma my sister is working the event so she’s here too, as well as lots of support from back home. I’m going to go and see them after this for a few celebrations, and just soak up the moment”

Straight after the medal presentation – and a few tears of joy – Shannon was back in action on the uneven bars putting in a strong and confident performance. She lifts up into handstand and swings with great momentum. Her pirouettes on the bar are controlled and she competes a brilliant Jaeger somersault on the high bar. She winds up for her twisting dismount and lands with a small step. It’s an impressive performance and she’s on a high with her score of 12.366.

Pavel looks ready to take on the rings final and build on his great performances in qualification and the all-around competition yesterday. He’s on straight after the Gold Coast Commonwealth rings champion Courtney Tulloch of England – and it’s a tough act to follow. He starts with a show of strength in his holds, including a Maltese followed by an iron cross. His routine building with a combination of tuck and pike somersaults between the rings. He wobbles slightly as he prepares for his dismount and takes a tiny step on his landing for a score of 13.766 and fourth place with one competitor to go. He’s disappointed not to make the medals, but it’s a sixth-place finish in his first Commonwealth apparatus final and he’s loved competing in the arena again in front of such a great crowd.

This was a great day for Scottish women’s artistic gymnastics. Cara and Shannon have been at the top of the discipline in this country for many years. Today Shannon cemented success for Scotland on the world stage.

> Missed any of the competition? You can catch up now on BBC iPlayer

Inspired by the gymnasts at the Commonwealth Games?