Louise Christie returned to Arena Birmingham along with her coach Amy Stewart to compete in the rhythmic all-around final in the penultimate day of gymnastics competition at the Birmingham 2022 Commonwealth Games. The Aberdeen gymnast was hoping to make history and claim a first rhythmic all-around medal for Team Scotland.

Having qualified in 11th place the previous day with a score of 103.900, it was a fantastic launch to her debut Games and she looked on form for a repeat performance during the all-around final.

The final saw the top 16 gymnasts – limited to two per country – from the first day of rhythmic action return to showcase their poise, musicality, and skill with the hoop, ball, clubs and ribbon. Twenty one year-old Louise would be the seventh gymnast to compete in each rotation which would give her a good idea of the scores to beat by the time she performed for the judges and the packed arena crowd.

The first rotation sees the gymnasts work routines with the hoop. Team gold medallist and second placed all-around qualifier Carmel Kallemaa is first to compete with a great routine to set the pace with 27.300, and although lower than her qualifying score, she is one to watch in this final.

Louise posted a solid score of 25.300 in qualification, although she did make a couple of mistakes. Making her way up to the podium, Louise looks confident, the nerves of a first Commonwealth final haven’t got to her. 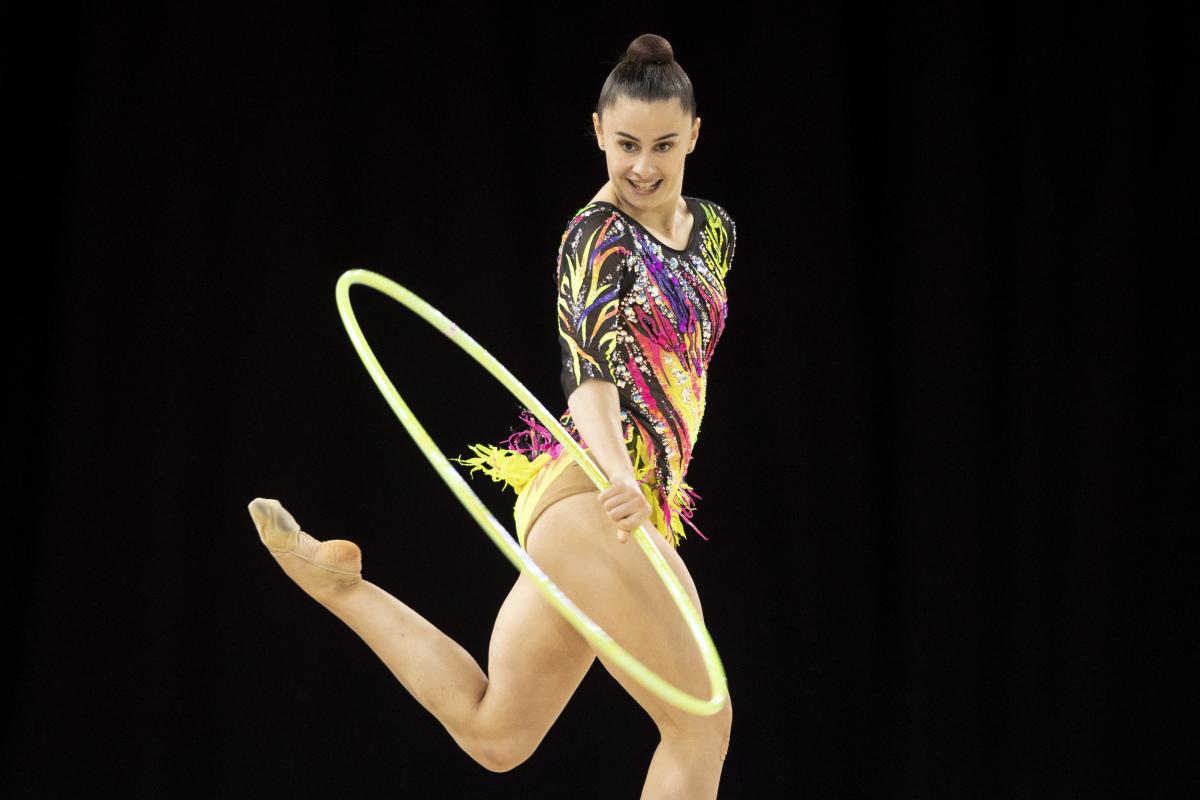 Her hoop routine starts with a powerful toss from the floor with her foot and moves with pace into a butterfly and some fantastic rolling elements. With some unsighted catches and unique throws, her movements are controlled. Her fouetté attitude spins are fast and well timed to her music, she corrects the misjudged catch and shoulder spin from her previous day’s performance.

She improves on her qualification with a clean routine to score 27.000, her highest in this code of points and one of her best ever performances. Even more impressive given how few events she has competed in this year. At the end of this rotation, Louise sits in seventh place.

In rotation two, we move to the ball routines, where the goal for the gymnasts is to keep the apparatus in constant motion with fluidity of movements. Louise’s lyrical choreography meant a great artistry score of 8.100 in qualification. Her routine begins with grace, rolling the ball with control and focus. Her balances are strong, with a split leg combination and keeping the ball in motion around her.

She follows with a bounce of the ball on a butterfly leap and continues with a split leg leap section moving across the floor and she throws the ball high. Five more forward attitude spins and a high throw with a double roll to finish, making the catch she so narrowly missed the day before. A significantly higher execution score means Louise improves on her qualification score by 0.650 and finishes the rotation with a 25.700.

At the midway point of the final, Louise is in 11th place on 52.700, and it is Marfa Ekimova from Team England who leads the pack, with Anna Solokova (Cyprus) in second place and Australia’s Alexandra Kiroi-Bogatyreva in third. With two more rotations where Louise picked up some great scores the previous day, it’s still all to play for. 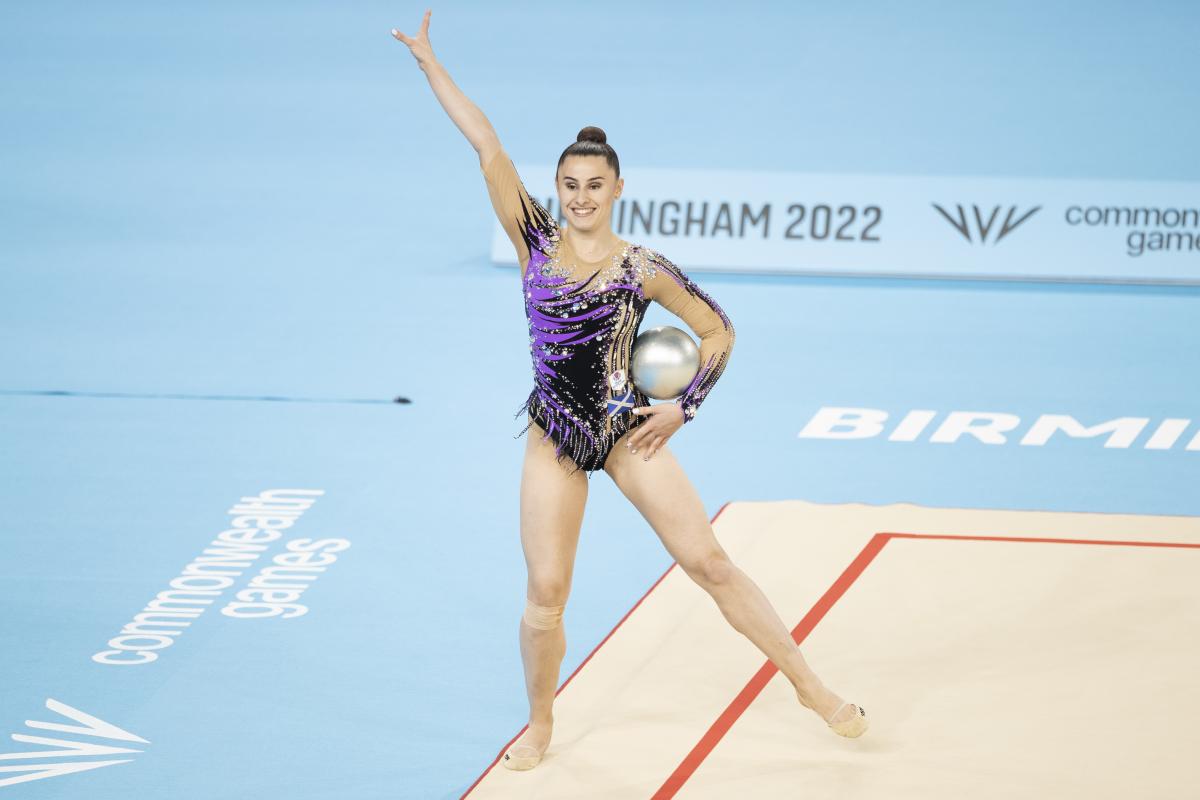 Louise’s clubs routine was her top score in qualification. She played it safe and still scored an impressive 27.650 and is ready to go for broke in the final. There’s plenty of complex choreography in her upbeat and technical routine. It’s a clean, energetic display of skill avoiding minor mistakes and maintaining artistry levels, getting the crowd behind her throughout.

There are some lovely elements at the start, including a double toss from her foot to begin. She throws high and captures the club while on the floor. Her split leg balance gives her an opportunity to show off her milling skills with an illusion spin to follow. There’s a sequence of more fouetté turns, spinning high on her toes and ends the routine with a strong throw and point to the audience. It’s an almost matched performance from qualification, losing only 0.05 in execution to score 27.600.

After the third rotation, Louise is in 9th place, and the excitement builds for the final and most recognisable piece of rhythmic apparatus, the ribbon.

Louise is thrilled to have a second chance to perform her specially choreographed routine which wowed the crowds during the qualification event. With Scotland the Brave on her ribbon – and pride in her heart – she finishes the competition strong with a score of 24.300, down from her score in the previous round.

Her fourth rotation routine is expressive to the core with some great apparatus control. She starts by throwing the ribbon high with an illusion spin, and continues to create atmosphere – with some clean lines, and brilliant coils and snakes. As we prepare for the return of the bagpipes, she lifts onto her toes and her next sequence is just as exciting as in qualification. She has a tangle with the ribbon during this section, but recovers well – throwing high again to perform her second section of traditional moves. Her skills creating shape with the ribbon in quick succession is good – with a tiny fumble over a grip adjustment meaning she’ll lose a couple of marks after the routine. Her final throw is powerful and the ribbon is caught with precision. With nine gymnasts still to compete, her score with ribbon of 24.300 brings her total to 104.600 – up 2.700 from qualification. 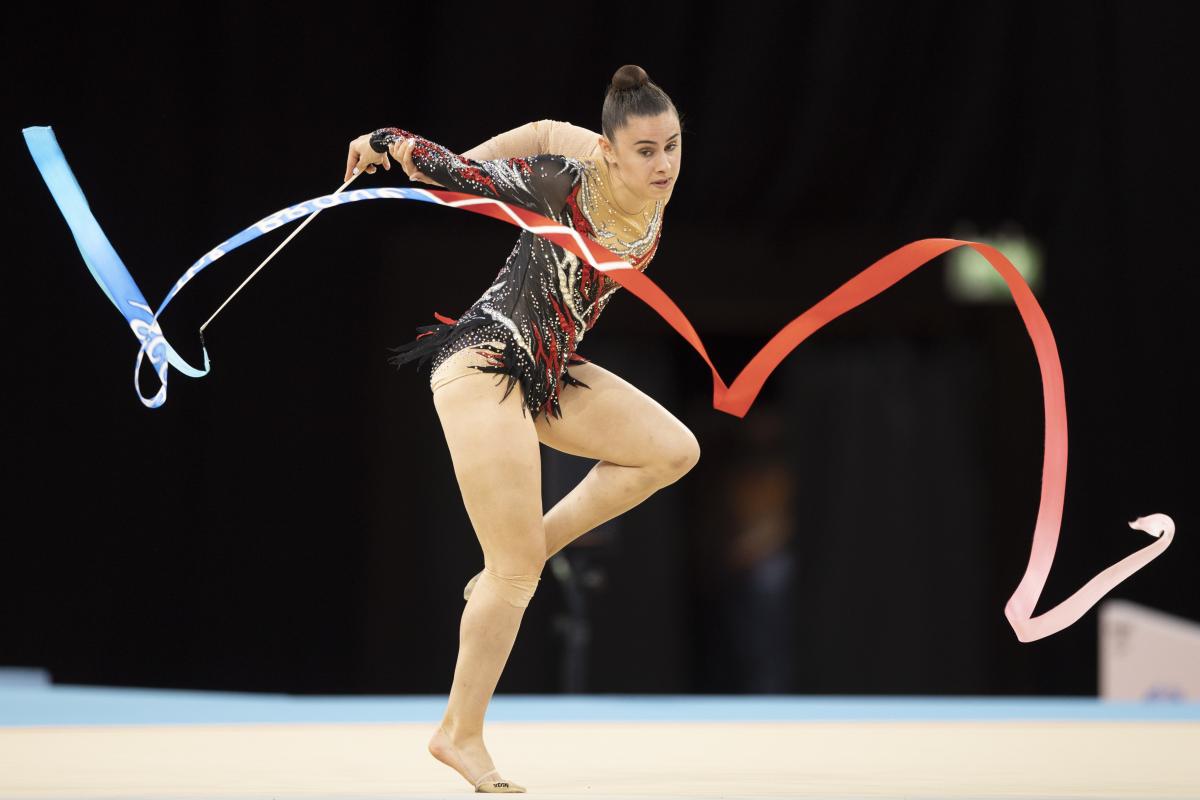 After her performance in the all-around final, Louise said: “I’m feeling really good. I made a couple of little mistakes in qualification, so I was happy to correct those today and the audience was amazing again getting behind the routines. I went out with the aim of enjoying it and there was a little bit less pressure because I’d already done the qualification.

It was really exciting, I was a bit disappointed with hoop in qualification, I think with it being my first piece I was quite nervous so I was happy to put out a stronger performance today and I’m happy with my highest score on this in the last year.

“It’s really special to have the artistic gymnasts here in the crowd here to support me – they really have been supportive across the games. They were all asking me about the etiquette of a rhythmic competition, so that’s been really fun. I’m just really glad I’ve been able to go out there and achieve this, I hope it inspires some younger gymnasts back home.”

It’s an exciting and nail biting final few performances and its Marfa Ekimova from England who claims the top spot on the podium and the Commonwealth title scoring 112.300. She was part of the bronze medal winning team from the opening day and added an astonishing 3.550 points to her qualification score to become the first English gymnast to win an all-around medal since 1994, and the country’s first ever gold.

Anna Sokolova from Cyprus wins the silver just 0.200 behind Ekimova, and Australia’s Alexandra Kiro-Bogatyreva takes the bronze on 111.100. Louise finishes in an impressive 10th place in her first Commonwealth final.

Following eight fantastic days of competition so far, the gymnastics at Birmingham 2022 concludes on Saturday where Louise is competing to claim a medal in the clubs and ribbon finals. We wish her all the best.

> Missed any of the competition? You can catch up on the BBC iPlayer