Louise Christie launched her Commonwealth Games campaign in the best possible style in the first day of rhythmic gymnastics in Birmingham. The Beacon gymnast qualified for three finals on her Games debut, a feat never previously achieved by a Scottish rhythmic gymnast.

On a great first day, Louise soaked up the arena atmosphere and secured her place in the all-around final in 11th place, and in individual apparatus finals in clubs – qualifying in fifth - and in ribbon, finishing in sixth. The last rhythmic gymnast from Scotland to qualify for an apparatus final was Joanne Walker in Victoria 28 years ago, who went on to win the bronze medal in hoop.

Louise was competing in a field of 29 gymnasts from thirteen nations and territories in two sub-divisions all vying for the all-around and apparatus finals. Six teams including England and Wales were also competing for a team medal. A member of the GB senior squad, Louise has recently represented Great Britain at the European Championships in Tel Aviv an FIG World Cup event in Uzbekistan and the Miss Valentine event in Estonia.

New Zealand’s Paris Chin opened the rhythmic competition, with a dramatic hoop routine packed with some difficult throws and flexibility work. The 17 year-old set the pace with 24.400.

Louise takes to the floor fourth after some well performed routines. Her hoop routine is packed with difficult throws from the start, with a powerful toss from her foot immediately moving into a section with a butterfly and a powerful boomerang element. She performs four attitude turns and during the next part, catches the hoop on her shoulder, causing her to drop it. She recovers well and the rest of the routine is controlled. She receives a good first score, with 25.300 enough for fifth place on this apparatus after the first sub-division rotation is complete. 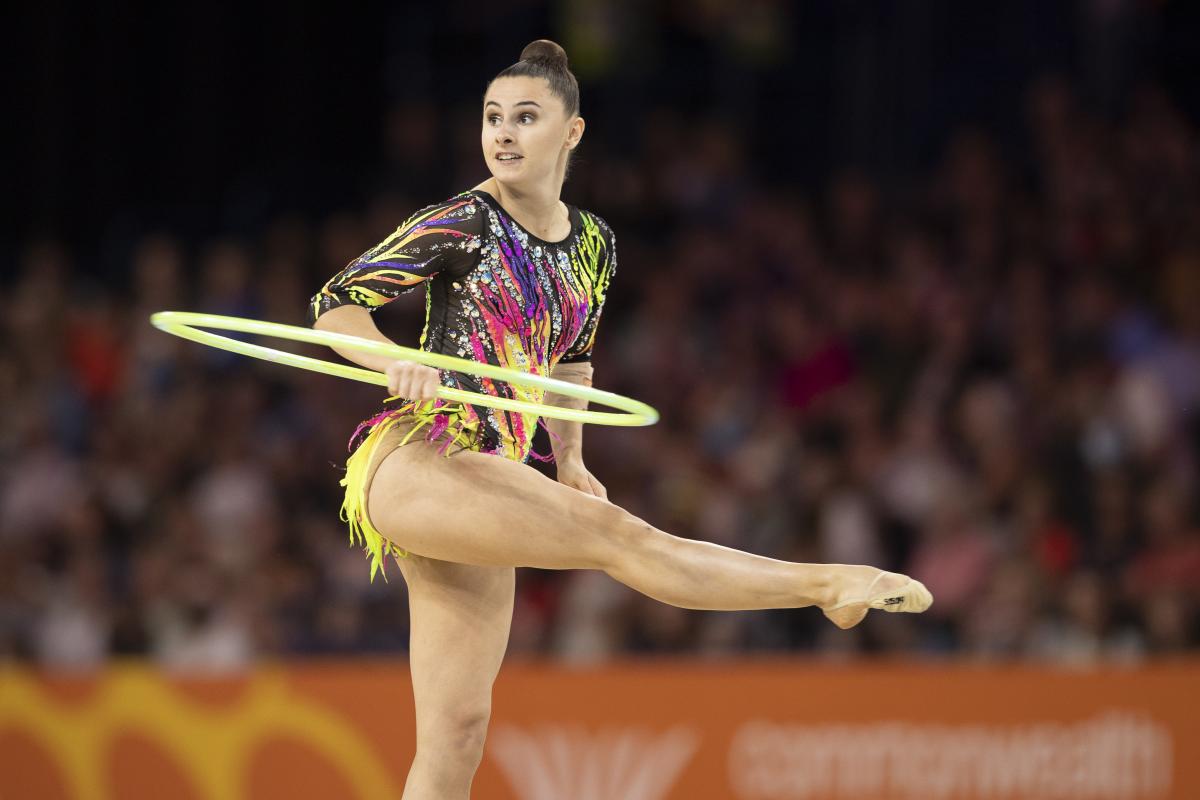 We move on to the ball routines, where Louise performs an emotional routine to an equally emotional song. The goal here is to keep the ball in constant motion throughout, and she does that with some wonderfully impassioned choreography. Her fluidity with the apparatus starts this routine off well, with a double twist to catch the ball after her first toss. She has clean lines in her powerful four leap combination section, as well as a nicely controlled butterfly leap and a double roll to end. She misses the catch in her feet by mere millimetres and picks up a 0.05 deduction. While not as strong as her European Championships performance, it scores a solid 25.050 to put her in fourth in the ball at the end of the first sub-division.

At the halfway stage of the sub-division, Louise sits in third place in the all-around, although there’s plenty more to come, as well as the day’s second subdivision.

Louise competes with clubs next and delivers an upbeat and technical routine. She starts off with a double toss from her foot, and quickly follows with a single high throw. Her dynamic balances in split position in the next section show her poise and control, and she moves to her leaps section, covering the whole of the competition floor. She doesn’t miss a beat – completing chaîne turns into an illusion spin. The routine ends with a smile and she knows it's a great performance. The crowd and the judges are delighted and it’s 27.650 which is the highest in this rotation to put her in first place in sub-division one with the hopes of a place in Saturday’s final. 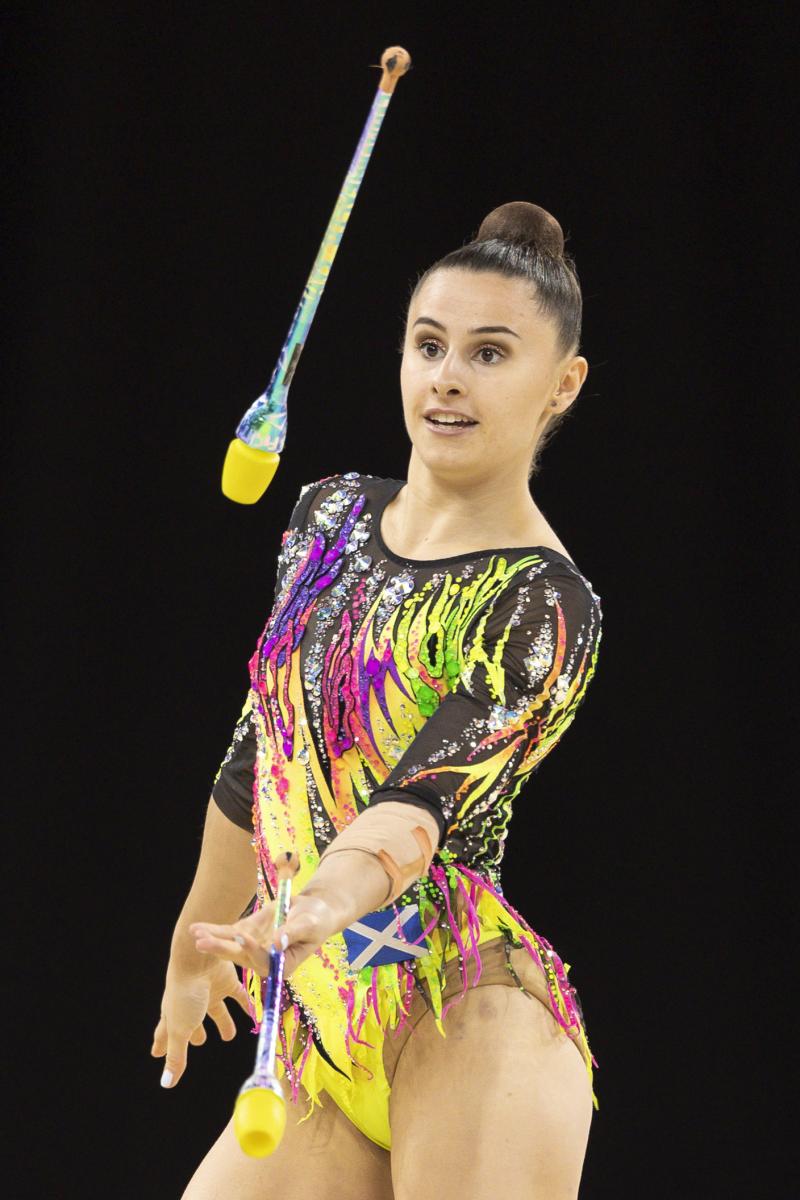 Louise’s final performance, a special ribbon routine choreographed for the Games to bring a flavour of Scotland to the arena will hopefully cement her place in the rankings ahead of the second subdivision.

The British ribbon champion starts strong, with Scotland the Brave written across her ribbon, which seems appropriate given Louise’s years of dedication and determination to reach her dream of competing at the Commonwealth Games and representing her country.

Her first ribbon throw is perfectly executed, and she smiles as she begins to build the routine with a series of spins, creating wonderful coils in the air with the ribbon. As the tempo increases, we see Scottish traditional dance elements interspersed with the balletic movements of her usual choreography. Louise performs two strong butterfly leaps, snaking the ribbon around her, and a double twist on her next throw leads her nicely into a second highland dancing inspired section.

A slight tangle of the ribbon on her neck and shoulders doesn’t dampen her performance and she ends on a high with a brilliant final throw catching the ribbon with her legs.

Her first time performing this routine in competition, and it earns the brave Scot 25.900 with only England’s Marfa Ekimova ahead by 0.100.

Following the first subdivision, Louise sits in third position in the all-around on 103.900. With fifteen gymnasts still to compete, we need to wait to see if it secures her a place in the finals. Current leader Marfa Ekimova from England with 108.750 is the score to beat, with her teammate Alice Leaper right behind on 105.300.

It feels a bit surreal to be honest, I’ve had the best experience ever. The atmosphere in the arena has just been amazing. I can’t even describe the feeling of everyone getting behind you when you’re doing your routines. Even though I had some mistakes, I’m so proud of what I’ve accomplished to get here.

“I played my clubs routine a bit safe when I went out there but I fed off the crowd and it was great when I saw the score come up. There are some really good countries in the second subdivision, so we’ll just have to wait and see, but I’m really proud of what I’ve achieved today and I’m just really happy and grateful for all the support I’ve had. It feels amazing knowing my friends and family are sitting in the crowd. It makes it 100 times better and this wouldn’t have been possible without them. It just feels really special.”

By the end of the day, it’s Anna Sokolova from Cyprus who takes the top spot in all-around qualification with Louise finishing in 11th place. In the individual apparatus, it is Marfa Ekimova (England) who leads the way in hoop thanks to her score of 28.950.

Louise is pushed down to 15th place. Alexandra Kiroi-Bogatyreva (Australia) qualifies in first for the ball final, with Louise missing out on a finals place, with her score placing her in 17th.

Canada’s Carmel Kallemaa had a stunning routine with the clubs to score 29.700 and claim prime position as we go into the finals. Louise qualifies for the final – and secured Scotland’s first apparatus final since the 1994 Games. Ribbon was a thrilling watch with Anna Sokolova (Cyprus) hoping to replicate her top performance to take gold when she returns for finals.

The team from Canada wins the team competition, with the highest ten scores across the three gymnasts counting towards the team total and securing the Commonwealth title. Australia take home silver, with Team England winning bronze.

After a spellbinding debut performance at these Games, Louise is back in competition tomorrow in the all-around competition. We’ll also see her on Saturday, competing to claim individual glory in the clubs and ribbon finals.

> Missed any of the competition? You can catch up now on the BBC iPlayer