Dan Purvis and Cara Kennedy are the 2018 Scottish artistic gymnastics all-around champions after regaining the men’s and women’s senior titles at the Scottish National Artistic Gymnastics Championships in Perth.

The pair were crowned in front of a capacity crowd on Saturday (24 February) at Bell’s Sports Centre in Perth where around 100 gymnasts are competing in the two-day event.

This is the sixth Scottish senior all-around title for Purvis, who won his first in 2008, and has gone on to Olympic, world and European medal success. He and his Southport club training partner Frank Baines, both selected for Gold Coast 2018, were in a tussle throughout the competition but Purvis sneaked ahead on the final piece of apparatus to win with 83.800 points.

Commenting on his sixth title, he said: “It’s great as it is a fantastic competition. It was fantastic to hear I made the Commonwealth Games team to start with, and today was all about going out with the other members of the team and do our routines and to be back doing all-around and regain my title was great.

“I always love competing in front of the home crowd. My family’s here and its really enjoyable, especially when you get results like today.

“It’s great to have a training partner like Frank where you push each other. Both of us wanted to come out on top but it’s a fantastic test of pressure and wonderful to see Frank back injury-free which will be really good for the team ahead of the Commonwealth Games.” 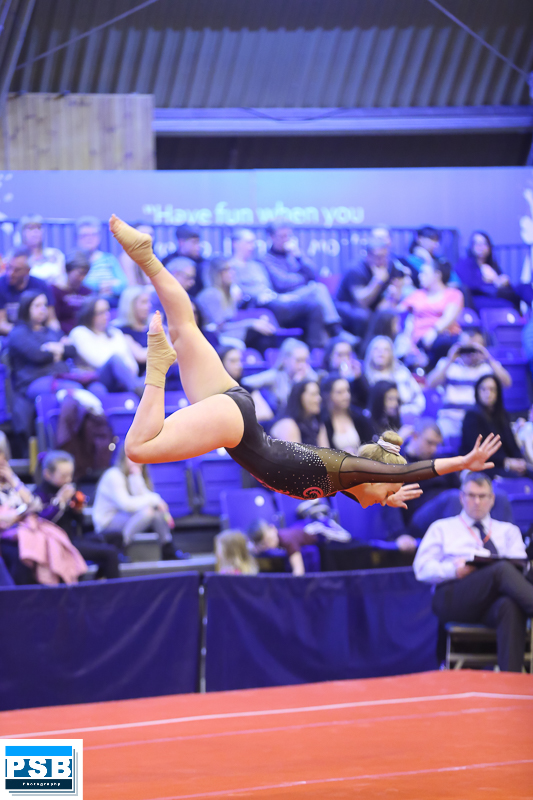 Cara also celebrated regaining the title she won in 2016, after being unable to defend last year due to injury. Garioch Gymnastics’ Isabella (Izzy) Tolometti took silver while the 2017 champion, Shannon Archer (City of Glasgow) had to settle for bronze. All three gymnasts, along with Sofia Ramzan (Dundee Gymnastics Club 2K) are competing for Team Scotland at Gold Coast 2018.

Speaking after her gold-winning performance, Cara said: “I’m delighted. It is so good to be back competing in the all-around after injury and brilliant to win again as it’s such an important championship and the one everyone wants to win. It’s great timing in the build-up to the Commonwealth Games.”

It was a clean sweep for City of Glasgow club with Crystelle Lake taking the women’s junior crown for the second year running and Millie Redford taking the espoir gold, with their women’s team also coming out on top.

In the other men’s categories, Pavel Karnejenko (Nottinghamshire Gymnastics Academy) won the junior men’s, and Aidan Jordaan (West Lothian Artistic GC) the youth all-around. Earlier in the day, Reuben Ward from Manchester Academy of Gymnastics followed up his back-to-back boys under 12 titles by winning gold in the under 14 intermediate category with Lochlan Brown (West Lothian Artistic Gymnastics Club) taking over the boys all-around trophy.

The apparatus and team finals, and the disability apparatus masters take place on Sunday 25 February.

Full results from the Scottish National Artistic Gymnastics Championships can be found at gymdata.co.uk or downloaded here