The Scotland team returned home with four medals after a strong performance at the Northern European Championships in Cardiff.

The event was an exciting opportunity for the six gymnasts to compete against other national teams – offering a thrilling return to international competition since the event was cancelled last October.

The team of Cameron Lynn, Euan McLellan, Fraser Lynes, David Weir, Ellie Patrick and Emily Bremner performed well at the competition, with a number of medal successes across the all-around contest and individual apparatus finals.

Day one of the competition saw the Scottish gymnasts compete in sub-division two, alongside gymnasts from Wales, Norway, Finland, Iceland and the Faroe Islands. Earlier in the day, the gymnasts from England, Sweden, Denmark, Ireland, the Isle of Man and Jersey competed in the hope of claiming an individual all-around medal and a chance to compete in the second day’s apparatus finals.

In the women’s competition, Emily Bremner’s solid all-around performance meant a top podium finish, edging out England’s Megan Bridge and Emily Todd in the medals, with a score of 49.800. Her performance meant that she also qualified for the uneven bars and balance beam finals. Teammate Ellie Patrick finished the day inside the top ten, with an overall score of 47.850 alongside Denmark’s Victoria Gilberg. 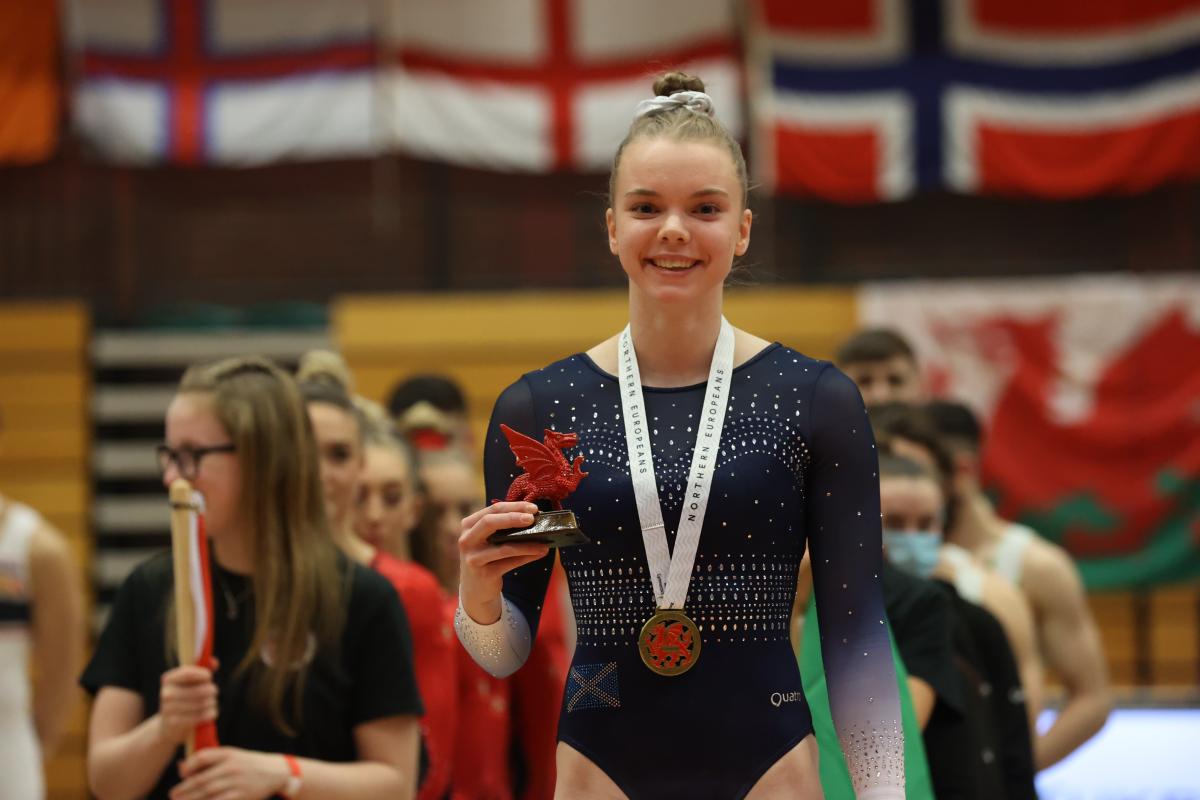 This was a great performance for both women, and a great achievement for Emily to have won the gold in the all-around. Their hard work and preparation for the competition really paid off, and they did well to represent Scotland.

There was also tough competition in the men’s all-around, with home Olympic gymnast Brinn Bevan returning from his recent appearance at the Artistic World Championships in Japan alongside Welsh teammates Joe Cemlyn-Jones and Alex Niscoveanu.

West Lothian’s Cameron Lynn achieved both a silver medal in the competition, and a new personal best in the all-around, beating his recent Men’s Artistic British Championship score by 2.585. He also successfully qualified for four of the six individual apparatus finals on day two.

On the second day of competition, Cameron and David were first to compete in the men’s floor final. Despite their efforts, the medals went to Joe Cemlyn-Jones (WAL), Michael O’Neill (IRE) and Jonas Ingri Thirisson (ICE). The Scottish gymnasts finished in fifth and sixth place respectively.

There were bronze medals for Cameron Lynn in the pommel final, finishing with a score of 12.750 and missing out on his second silver by just 0.100 and also in the vault with a score of 13.825.

Fraser Lynes finished in joint fifth place in the men’s rings final, with a score 12.700 – matching that of England’s James Leaver.

Due to an earlier injury, Emily withdrew from the uneven bars final, and instead focussed her efforts on the beam – finishing the competition in 10th place with a score of 10.700 after a couple of falls.

We congratulate all of the gymnasts who competed at the Northern European Championships, alongside the team of coaches, Becki Campbell, John Campbell and Marius Gherman. We also thank the following judges for their roles at the competition: Duncan Runcie, Tommy McGill, Stephen Tonge and Kirsty Burt as well as team manager, Jamie Bowie.